The tactical battle between the Lions and South Africa took a dramatic turn in the decider when an unfortunate injury to Dan Biggar forced the Lions trump card, Finn Russell, to come in and speed up the play.

The higher the stakes in rugby, the harder it is to play with a relative freedom and the game can become a tactical battle of inches, high balls, forcing pressure on the opposition and pouncing on errors.

Finn Russell's performance ran contrary to how the whole test series had been played to that point. It wasn’t perfect, but he absolutely turned the thought process on its head from the moment he was introduced.

Up to that point, the South African gameplan wasn’t working as it was last week. They were mixed up at the kick receipt and gave away an uncharacteristic penalty for playing the ball in an offside position, while in front of the player that dropped it.

They weren’t putting the same pressure on their own kick chase either, despite an Eben Etzebeth masterclass at the ruck, pointing out that Alun Wyn Jones was not technically bound and Etzebeth had the rights to the ball.

However, South Africa had the only moment of fast ball up to that point and it was a missed tackle from Ali Price that then put Robbie Henshaw on the back foot in a scrambling defence and subsequently earned themselves a penalty. 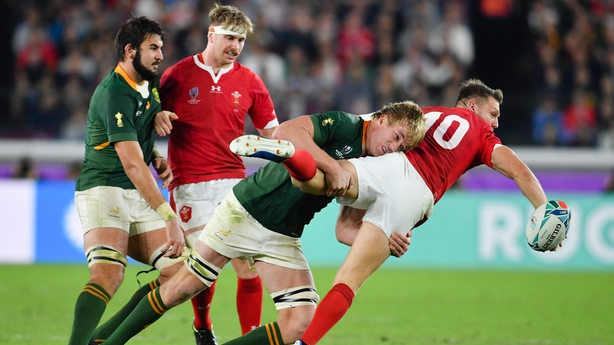 The Biggar substitution happened at 11 minutes. In that time, he had missed the penalty from the aerial mix up, South Africa had thrown a crooked lineout to the very front and the Lions won a penalty from a scrum that went down on the loosehead side.

Russell stepped up to level the scores to settle himself into the game. South Africa were stuttering.

From there, Russell decided to get the ball in his hands. Helped by Jack Conan’s decision to break away from the maul, the Lions threw two offloads before a Finn Russell kick pass to fellow test debutant, Josh Adams. All of a sudden the game looked different. South Africa were on the back foot, the Lions were back throwing offloads and the speed of the ball was upsetting the dominant South African defence.

When the Lions played through their out-half, it meant that South Africa had more decisions to make in defence. Russell was able to pick off more passes and every pass drew more decisions from the defence. The more questions you ask of the defence, the less answers they are likely to have. The Russell wildcard definitely brought some spark to the game.

I was slightly worried when the mercurial Scotsman was so vocal about turning down three points and kicked to the corner. Was it a cover up for his lack of practice in high pressure kicking situations, considering he isn’t the first choice kicker at his club or was he genuinely putting it up to South Africa?

In hindsight, Russell kicked 4/4 and looked absolutely comfortable from the tee. He was obviously on all-out attack mode and the Lions were on the same page. You would imagine that Gatland had decided that you couldn’t go toe to toe with South Africa in the small exchanges and you needed to land heavy shots. One of which was the maul try in the 20th minute. 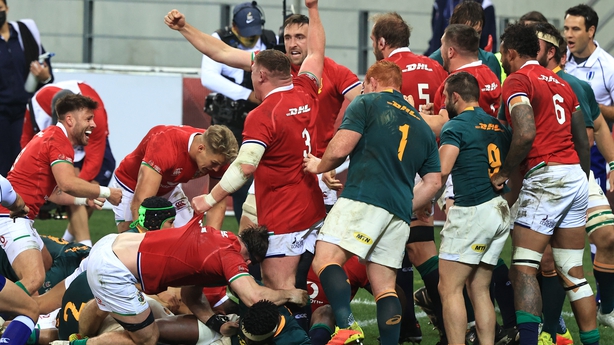 However, you live and die by that sword. There were opportunities for the Lions to stretch that lead, not to mention the 2-v-1 opportunity that wasn’t executed on the right touchline which could have seen them go ahead by two tries.

A lineout five metres from the South African tryline was stolen by Etzebeth and Tom Curry was involved in a mad moment of illegal mauling in front of the ball to set the Lions momentum back. South Africa were on the ropes and the Lions couldn’t land the devastating blow that was needed before half-time.

The break only suited South Africa because they looked as though they reorganised and refocused on their pressurised gameplan and played all the territory after the restart. The Lions were being suffocated and couldn’t get back on the attack.

However, South Africa still missed opportunities from the boot of Pollard and couldn’t chip away at the Lions lead. There was a 15-minute deadlock until Russell kicked down the middle and Le Roux returned poorly, giving the Lions an attacking platform to build on.

The visitors finally got some breathing space but Tom Curry started a cascade of events that resulted in South Africa taking control of the game.

His swivel pass couldn’t find Russell. Then came an exit from Price on the back foot. Everything was still under control until Lukhanyo Am once again contributed to his most under-rated role. He took charge of the bobbling ball, challenged the defence before offloading to Le Roux who found the dangerman Kolbe on the outside, who added Liam Williams to the growing list of covering defenders that will have ongoing nightmares trying to read the dancing feet of the South African winger.

South Africa ahead 13-10 and the game had changed.

Murray came on and took over the captaincy with similar tactics of going to the corner, it was clearly a ploy from management and less to do with Alun Wyn Jones and the influence from his unpredictable out-half.

South Africa gave away three penalties in four minutes which allowed the Lions another foothold in the game. However, history repeated itself and once again it was Rassie and the South Africans that won the tactical battle by springing Morne Steyn, who kicked six points to devastate the Lions and once again snatch the series win. 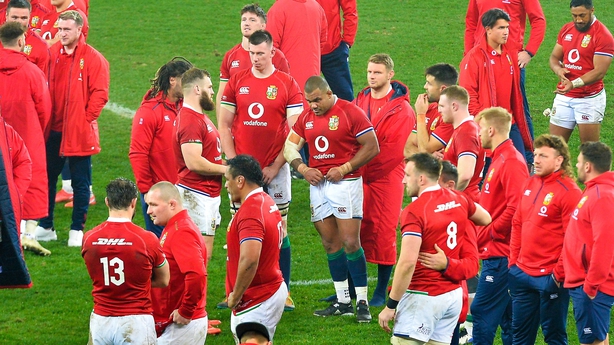 The whole series probably had as much excitement and drama off the pitch as it did on the pitch. There was little rugby played at times, apart from moments of genius from the likes of Kolbe and Russell. South Africa got what they needed – a series win, hope for their country and a continued resurgence of their dominance in the rugby world under Rassie and Jacques.

From the Lions perspective, they made it happen. A tour that could so easily have been cancelled but they chipped away and gave us a series that was tied up until the final minute of play.

Every big rugby tournament brings change. How will Rassie’s comments and hour-long video be handled by World Rugby? They have some off the pitch discipline and respect issues to sort out if the game is going to keep its integrity. However, on the pitch we will need to find an answer to these hour-long halves of TMO checks and lecturing from the referees.

Hopefully, we can all return to dissecting rugby analysis involving players actions much more than that of the TMO, referees and coaches.

The Rugby Championship is sure to reinstate what we expect from attacking rugby and Northern Hemisphere league action is going to challenge our thoughts with the introduction of new law variations. There is loads of rugby to come, but it won’t be as tense as that Lions series for another while yet.