Partly sunny with temperature around 18C

The Lions go in search of victory to secure what would be just their third series win in South Africa since 1896.

But they face a Springboks side with the taste of blood in their mouths and determined not to suffer what would be just an eighth-ever home series defeat (to any opposition) in their history.

And it's bad blood, too, such was the animosity that has pulsed through the series since the end of the first Test, won 22-17 by the tourists.

South Africa director of rugby Rassie Erasmus may feel his behaviour in the build-up was justified following their comprehensive 27-9 victory last Saturday but it certainly lowered his standing across the rugby world.

The pre-amble to this match hasn’t been as prickly with Warren Gatland refusing to get drawn into that world.

On the evidence of last week the Lions boss wouldn’t have time to focus on anything other than coming up with and figuring out how to execute a game plan that can hurt the world champions.

Forget the Springboks in red and find new plan

The Kiwi has made a number of changes to his team but it will be more about out-thinking the Boks this time around. The hosts would relish a toe-to-toe slugfest and have the manpower to edge that battle.

The fresh bodies should help the Lions and there’s no getting away from the fact that Faf de Klerk and Pieter-Steph du Toit’s absence will be felt by the hosts.

A Lions win would mark one of Gatland’s great achievements but it’s going to take something special to save this series from being remembered as anything but a nasty, commercially-led venture that has damaged the sport.

This Lions series against the World Cup winners, pushed through against all the odds, was supposed to showcase ohow great the sport can be but between the on and off-field exchanges has already brought the game into disrepute.

South Africa are without back row Du Toit and scrum-half Faf de Klerk, both injured with Lood de Jager and Cobus Reinach coming in.

The manner of last week's defeat meant Gatland was always like to swing the axe. The Kiwi has made six personnel changes and one positional switch. 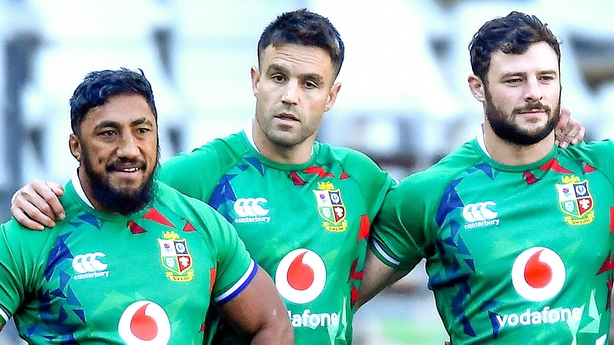 Bundee Aki comes into midfield with his Ireland partner Robbie Henshaw switching to inside centre.

Ali Price gets the nod at scrum-half with Conor Murray dropping to the bench. Wyn Jones and Ken Owens start at loosehead and hooker respectively as Mako Vunipola and Luke Cowan-Dickie man the bench.

Adam Beard, Sam Simmonds and Finn Russell are also in the match-day squad for the first time in the Test series.

Aki joins former Connacht team-mate Henshaw in the centre for his first Lions Test cap as Gatland hopes the duo’s chemistry can help unlock a miserly Springboks defence, which has conceded just one try over the two games.

The New Zealand born centre played just one game in Ireland’s 2021 Six Nations games (sent off v England by Mathieu Raynal, who takes charge here) but his form in the warm-up games warranted a start here.

Murray drops to the bench with Price’s tempo preferred from the off here, as it was in the opening Test.

Tadhg Beirne, a replacement forward in the first two games, can consider himself unlucky to miss out on match-day selection. England’s Simmonds is preferred.

As expected, Tadhg Furlong retains his place, as does the hard-working Jack Conan.

Gatland has also opted for Adam Beard, the late call-up, to sit among the replacements, with Iain Henderson, once more, destined to finish a Lions tour without a Test cap.

Jacques Nienaber: "Luckily for us in our group, they’ve been there before [in a World Cup final]. It doesn’t make it easier but it helps you having that experience.

"I’ve been there before I’ve felt these butterflies before and you just have to work through it.

"It’s a do-or-die for both teams, it’s a final and it’s going to be massive."

"And South Africa at the moment don’t want to do that. We had stud changes, we had TMO decisions, we had the referee stopping the game for cramp. We can’t have 60-odd minute halves."