The Lions fell to their heaviest defeat since the calamitous 2005 expedition to New Zealand when they were routed 27-9 at Cape Town Stadium, wiping out the advantage gained from edging the first Test.

Jones accepts that coach Warren Gatland will swing the axe in response to a feeble second-half performance in which 21 unanswered points were conceded, but is convinced the series can be rescued when the tour reaches its climax.

"It's going to be obviously the biggest week of the tour now. It's the last chance to put it right. We're fortunate we've got another week," the Lions skipper said.

"There has been a lot said about a wounded Springbok but I think the Lions have taken a dent and we need to put it right.

"Immediately after the game we got together and said we had to stick together. There was a lot of eye contact.

"Everyone is well aware that Warren will make changes - he's notorious for making changes - and we go again.

"There will probably be opportunities for some and there's definitely a feeling we can probably put it right.

"It will be interesting to see what Warren does with the team. But definitely it's going to be a big week."

A dreadful spectacle marred by repeated stoppages by officials to review incidents was hard viewing and each half lasted over an hour.

The incessant breaks aided the Springboks after their preparations were affected by an outbreak of coronavirus, while preventing the Lions from injecting any pace into the game.

"We obviously talked about tempo, it's what we saw last week, and we tried to do that. But we weren't able to do it.

"That's because of the Springboks' game management. Ultimately we go when the whistle's on.

"A lot has been said in the week about speaking to the man in the middle so I tried to be as respectful as I could to try and get that tempo in the game, but I obviously failed at that."

Jones insists it was the Lions' failings rather than South Africa's response following their defeat in the first Test that led to their downfall.

"From the outside it probably looked like a backlash, but from where I'm sitting here we didn't help ourselves," Jones said.

"We were well aware of what they were going to improve on. They probably did to us what we wanted to do to them. They tried to do it last week, they probably just did it better and we saw more of it." 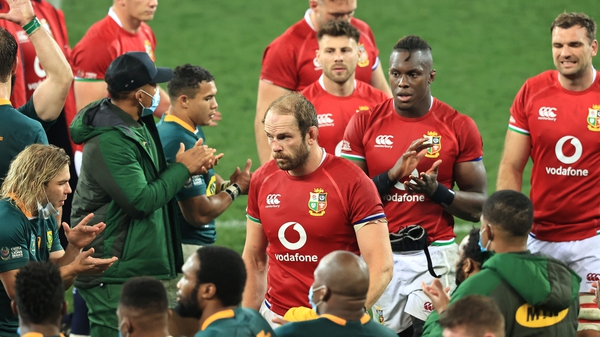