The Lions are in the ascendency after a tactical first Test in Cape Town.

The most interesting observation was how the Lions turned their fortunes around and dealt with the South Africa threats in a different manner in both halves.

Warren Gatland's side were well aware of the Springboks' strengths and tried to take the game to them from the very start.

I’m not sure many would have expected the Lions, the best players from four different countries, to attempt a high contestable kick down the throat of Cheslin Kolbe from their first attacking set piece in the opposition half.

That was the first South African threat challenged, Kolbe, the unpredictable winger.

From there, the Lions attempted to go wide on both of their next set piece set ups, as if to challenge the hosts' aggressive line speed.

It was like a pretence of confidence and a willingness to take the World Cup winners on where they were strongest but Lukhanyo Am shut it down with a shuddering hit on Elliot Daly, whose game never really kicked on from there. 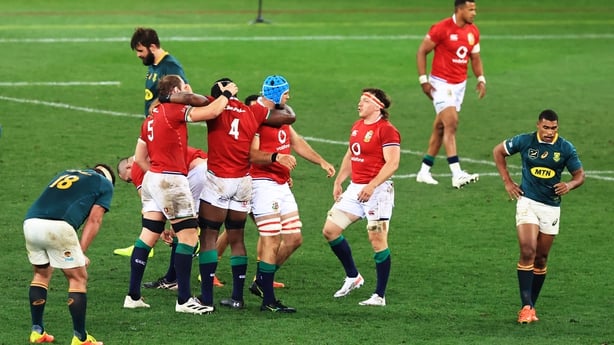 Tom Curry put a poorly timed hit on Faf de Klerk that resulted in a penalty against the away team, he had another penalty in a ruck before that and the Lions found themselves 6-0 down a long way from home.

You could see what the Lions were trying to do by challenging the South African top performers and trying to outplay the aggressive defence but it wasn’t coming off for them.

The kicking game was always going to be a battle and Jacques Nienaber's men were coming out on top.

After all, that’s their game, they make no apologies for it and they’re the best in the business at transferring the pressure on to the opposition team.

Their director of rugby Rassie Erasmus doesn’t see kicking as an exit.

Of course, you get further away from your own posts if you kick the ball away.

However, watch the South Africa chasers when the ball gets kicked: it’s like they come to life and revel in the chaos. 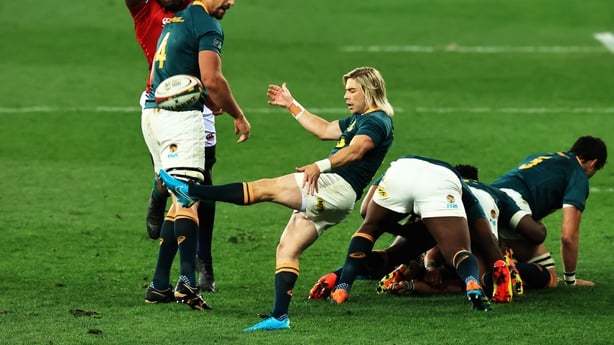 They love to make the opposition uncomfortable with their physicality and work ethic and not every team can deal with it.

The Lions were misfiring at this stage.

Dan Biggar uncharacteristically missed a kick at goal. Daly was just short with a long-range effort that we’ve seen him convert before and there were penalties in attack and defence against the Lions.

12-3 at half-time and the Lions were being squeezed, exactly the way we thought they would be.

The Boks aren’t subtle with their tactics. They almost tell you how they’ll play and do it anyway.

However, Gatland proved his worth with a change of tactics from the Lions attacking play.

You could tell that the Lions knew what the South African strengths were in the first half and they tried to upset them and play their own game.

They tried to play to width but got caught in the tackle numerous times and the fouth penalty kicked by Handre Pollard in the first half after a Pieter-Steph Du Toit tackle on Robbie Henshaw behind the gain line was confirmation that the Lions needed to change tact. 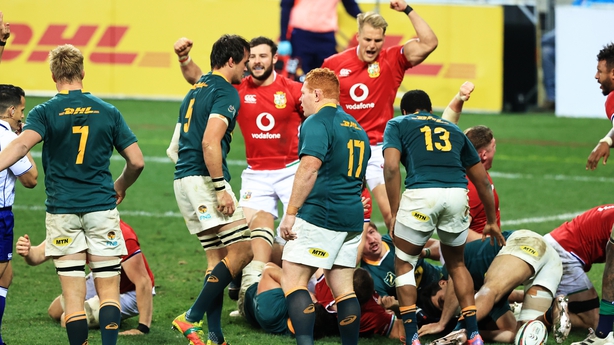 Alun Wyn Jones said himself in his post-match interview that his team needed to shift their kicking game further up the pitch.

It was almost like he heard Sam Warburton on commentary asking the Lions to stop over-playing the ball in the middle third of the pitch.

They kicked out of their half and forced South Africa to give away a penalty.

They kicked to the corner to use their own strength in the maul.

All of a sudden the Lions were keeping the ball and putting South Africa under pressure, in turn, they were giving away penalties once possession was held for five or six phases.

After trying to outsmart the home side, the Lions decided to be more direct.

They took South Africa on up front and after a series of penalties, converted a try from their maul to pull the game back to 12-10.

They also decided not to attempt to get around the outside of the in-swinging South African defence, which is where South Africa were gaining momentum in their game in the first half.

Instead, the visitors changed the point of attack and use both sides of the ruck.

South Africa relish the open side of the ruck and race up fast off the line with physical confrontation.

The Lions decided to use the short side more and frustrated South Africa into giving away penalties.

It wasn’t the most exciting second half if you’re looking for open rugby, yet there’s an enjoyment in the tactical battle that played out between two outspoken head coaches.

The Lions didn’t have it all their own way either.

South Africa had a try chalked off after Willie Le Roux was marginally ahead of the kicker but the three-time RWC winners once again revelled in the chaos created by their own attacking structures for De Klerk to touch down.

It came from a contestable kick that they won back, a wild pass sent along the floor and some impressive tidy up skills from Du Toit.

South Africa create so much uncertainty in a scrambling defence by using their short kicking game which came once again from Makazole Mapimpi, much like the World Cup final in 2019. 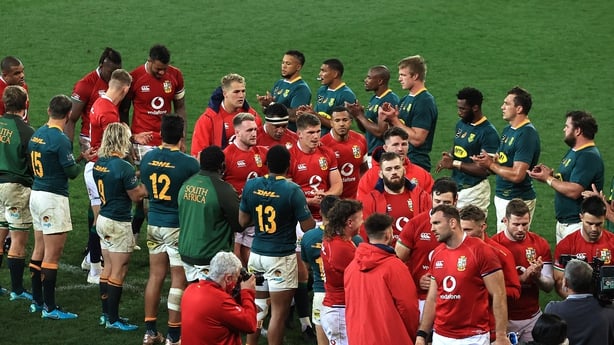 The home side had a second try overruled after Kolbe’s knock on from another contestable kick that caused mayhem.

However, the Lions almost took South Africa’s way of playing.

They turned over their own contestable kicks which resulted in knocks-ons from Kolbe and Mapimpi.

The visitors also won a scrum penalty which would have been a South African strength in the first half.

The Lions were helped by their rivals losing the penalty count 7-1 in the second half.

Gatland was also lucky not to lose Hamish Watson for at least 10 minutes of the closing stages after his tip tackle on Le Roux.

If the Lions are going to win the series in the next game they will need to get ahead of Rassie’s next move. 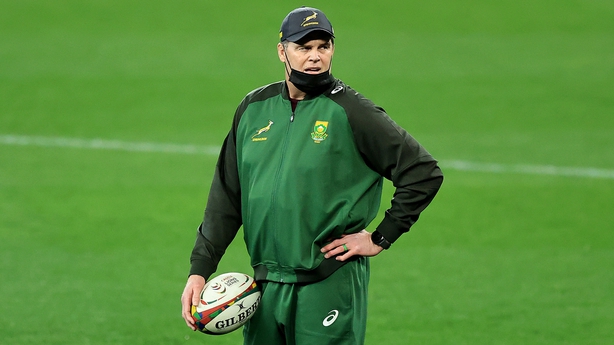 The Springboks always challenge the status quo, evident by their main man becoming a water boy to get closer to the action.

Things will change between now and the next test match. Tactically, South Africa will bring something different that Gatland will have to be ready to counteract.

The greatest teams change the game while they’re ahead and that is what the Lions will need to do.

There’ll be a few typically brave selections calls from Gatland too. Daly could be in trouble and I’m expecting at least one change in the front row.

Maro Itoje was colossal and the bench was a massive strength for Gatland.

Hopefully, Biggar will come through his return to play protocol following a head injury assessment and the Lions will be ready to step up to the challenge once again.