Warren Gatland has braced his British and Irish Lions for a backlash from South Africa after the tourists seized a 1-0 lead in the series by winning 22-17 at Cape Town Stadium.

The Lions trailed 12-3 at half-time but improved dramatically, with Luke Cowan-Dickie beginning the resurgence by finishing a line-out maul, while the boot of Dan Biggar and Owen Farrell did the rest.

South Africa's coronavirus-disrupted build-up took its toll in the second half, but they only had themselves to blame for the indiscipline that allowed the Lions back in.

Gatland knows the Springboks will be fired up for the second Test, but insisted the Lions can also find another gear.

"They'll be hurt from this because they're an incredibly proud nation and world champions. Next week will be even bigger and tougher I would expect," Gatland said.

"From our point of view you win that first one and you know that, no matter what happens, you're going to the last weekend of the series. That keeps everyone engaged and really interested in it.

"For us, we feel like there's an awful lot more in us too. From a conditioning point of view it looks like we're getting stronger and stronger and are able to keep the intensity and the pace going for the whole 80 minutes.

"That's a really pleasing aspect of how hard we've worked over the last six weeks or so."

The Lions finished the match in full control, but Gatland admitted it had been a nerve-jangling evening, especially when South African TMO reviewed a try by Willie Le Roux before chalking it off for offside.

"The message at half-time was that we're still in the arm wrestle. Let's keep our patience and we will get chances. Don't force things," Gatland said.

"In that second half we got stronger and stronger and got ourselves back into the game, but it was a really tough and tight Test match that could have gone either way.

"We came from behind and finished really strongly. I thought the last few minutes we were excellent.

"You look at it for both teams and know that it was a bounce of the ball, it could have gone any way. There were a couple of big calls as well.

"If they had been different it might have affected the result. We were happy with the way we defended, we didn't think they created a lot of attacking opportunities."

At the heart of the Lions' victory were towering performances from England forwards Maro Itoje and Courtney Lawes.

"Both of them were outstanding. Courtney Lawes carried exceptionally well, he was strong. I thought Maro was immense as well. Both of them had outstanding games and that was key for us really." 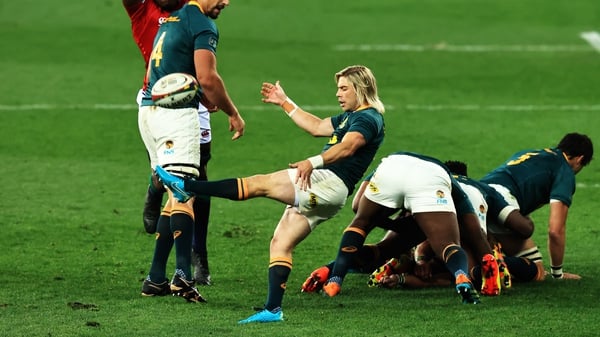