The Springboks will be playing only their second Test since lifting the 2019 World Cup and will target Warren Gatland’s men with their ferocious pack, suffocating defence and aerial dominance.

Only once before have the Lions lost the first game but gone on to win the series – a distinction held by Finlay Calder’s 1989 tourists – to raise the stakes for the collision.

Henshaw is making just his third appearance of the tour after being hampered by a hamstring injury, but the Ireland centre knows what is coming after facing the Springboks on four previous occasions.

Henshaw said: "We are massively ready. We’ve done a lot of contact work, we’ve had a lot of games now to date against tough opposition and big men down here in South Africa.

"We are ready and we have to expect a big kicking battle on our hands and big men running at us up front.

"It’s going to be a tough battle up front and the battle at the gainline will be huge. They’ll be well up for it, there will be huge intensity to the game.

"We have to try and dominate the gainline in the centres and get go-forward for the Lions." 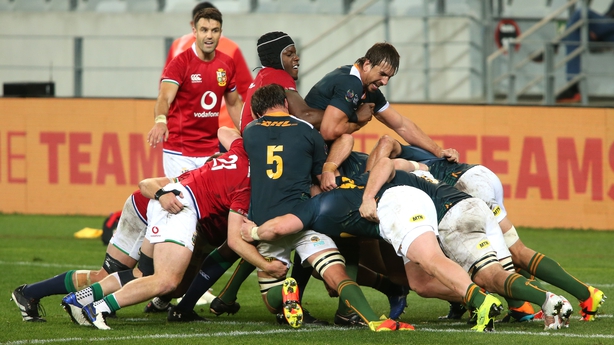 Henshaw will continue his midfield partnership with Elliot Daly that was seen for 57 minutes of last Saturday’s rout of the Stormers – one of only two combinations tested by the Lions so far on tour.

The Leinster centre will provide ball-carrying grunt, power in defence and smart distribution, acting as a foil to the natural athleticism and instinctive play of Daly.

"It’s a really exciting partnership with Elliot," Henshaw said. "His game knowledge and attacking skill set are second to none in the game. He’s a top class player.

"His defensive reads are also quality. I’ve only played with him two or three times in the last two tours but it’s great to partner up with him – he’s a quality player.

Confronting the Lions’ midfield will be the World Cup-winning pairing of Damian De Allende and Lukhanyo Am.

Bundee Aki has been playing the role of the hard-running De Allende in training as Henshaw continues a rivalry he knows well from the provincial stage in Ireland.

Henshaw said: "I’ve played Damian about five times already this year just within the PRO14. But this is solely Lions versus South Africa.

"It’s going to be a huge test but I’ll have a chat after with him as always. He’s a great player and a great guy as well."