Leinster have been paired with Bath and Montpellier, while Munster will face matches against Wasps and Castres as the four Irish provinces' 2021-22 Heineken Champions Cup pool stage opponents were confirmed.

Ulster join Leinster in Pool A where Dan McFarland's side will face Clermont Auvergne and Northampton Saints, while Connacht are in Pool B alongside Munster and take on Stade Francais and Leicester Tigers.

The 24 clubs from the new United Rugby Championship - which replaces the Pro14 - the Gallagher Premiership, and France's Top 14 were drawn into two pools of 12 and will play two teams from the same pool home and away.

Four rounds of matches will be played in December and January and the eight highest-ranked clubs from each pool will qualify for the knockout stages, with the last-16 taking place over two legs and the final being held in Marseille on 28 May. 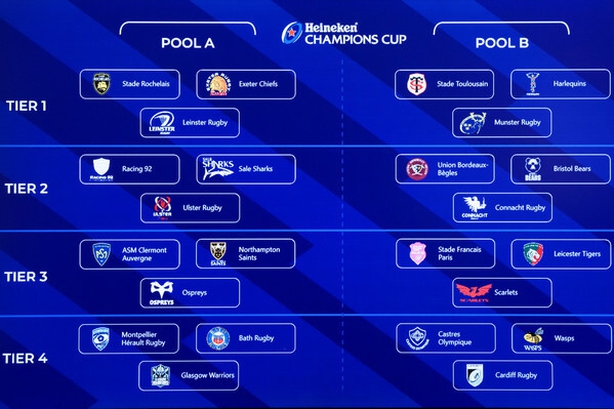 Holders Toulouse were paired with Wasps and Cardiff, while 2020 European champions Exeter face ties against Montpellier and Glasgow.

Ronan O'Gara's La Rochelle, who were runners-up last year and beat Leinster in the semi-finals, will be up against Bath and Glasgow Warriors.

Meanwhile, Premiership winners Harlequins will play Castres and Cardiff in their pool matches.