Stuart Hogg leads the British and Irish Lions out against the Stormers on Saturday relieved to be back in action after a "horrendous" week spent in self-isolation.

As a close contact of Gregor Townsend, who tested positive for Covid, Hogg was forced to stay behind in Johannesburg after most of the touring party departed for Cape Town on Sunday.

It has ruled the Scotland captain out of selection since skippering a 56-14 victory over the Sigma Lions on 3 July.

"It has been frustrating. I've had to just get on with it, suck it up and get on with my job," Hogg said.

"The key was to get into a good routine. It's a long old time to be hidden away. It was about getting my routine sorted and being as productive as I could.

"It was challenging at times, but we had a mini-isolation group who had a good bit of craic and kept each other going. I wouldn't wish it on my worst enemy. Honestly, it was a horrendous few days.

"It became a little bit easier once the touring party left. We got a little bit of time in the gym and I managed to sanitise it down about a million times.

"I got the chance to do everything I possibly could. I was carrying a little knock after a training session but I'm all good now and excited to get going again.

"For me, the main thing is everyone is fit and well and healthy. I'm absolutely buzzing to be back, hugely excited about another opportunity to represent the Lions."

Hogg has Saturday's run out at Cape Town Stadium to make up for lost time in his pursuit of the full-back duties for the first Test against South Africa on 24 July.

Four years ago the Exeter Chief was making waves in New Zealand only to be forced off the tour because of a fractured eye socket incurred during a collision with team-mate Conor Murray.

"It's something I kept quiet and to myself for a long time. The experience of 2017 - I felt going into that tour that I was playing some good rugby. To have it taken away was bitterly disappointing," Hogg said.

"It took me a good year and a half, two years, to get over it, to get back up and running and get excited about playing rugby again.

"That hunger and drive I kept to myself. My focus all along was to give myself every opportunity to represent the Lions again.

"Now I am here, it's about making the most of it. There's been a lot of hard work along the way."

Alun Wyn Jones has been propelled straight back into the squad to face the Stormers with the aim of preparing him to take the helm against South Africa in the first Test.

Three weeks after dislocating his shoulder against Japan in what was announced as a tour-ending injury, Jones will take his place on the bench on Saturday for the final fixture before the opening collision with the Springboks.

It was during two full-contact training sessions with Wales on Tuesday that the game's most-capped player proved his fitness in a remarkable comeback, taking a full part in line-outs, scrums and mauling as well as tackling in team versus team scenarios.

Gatland had stated that Jones, who is to be reinstated as tour captain in place of Conor Murray, would face two or three days of self-isolation on arrival at the squad’s base outside Cape Town and would begin training on Monday, but that plan has been revised with July 24 in mind.

"We felt that if he was going to be in contention next week then he needed to have a hit-out and prove 100 per cent that he is fit and ready to go. He needs 20 minutes," Gatland said.

"If someone comes off early, he’s ready to go. We’ve been looking very closely at a number of videos of the Welsh training sessions he has taken a part in. If the medical team hadn’t passed him fully fit, he wouldn’t be here." 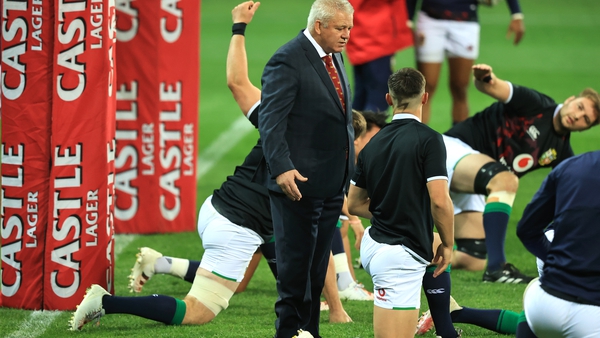