The British and Irish Lions brushed aside the chaos enveloping their tour of South Africa to crush the Sharks 54-7 at Emirates Airline Park.

A match threatened by Covid-19 was given the green light less than two hours before kick-off as the Lions were forced to scramble a team together after eight players went into isolation following two positive tests.

Four starters including half-backs Gareth Davies and Dan Biggar and four replacements had to be withdrawn from the matchday squad, with only the pack escaping any changes.

Evidence of the emergency surgery performed on the team was seen in Owen Farrell and Taulupe Faletau wearing shirts with no number and Louis Rees-Zammit playing in the 10 jersey.

And in a farcical situation on the bench, Finn Russell was the only recognised option to cover all seven backline spots as part of an unheard of seven-one split.

The tour may be in danger of unravelling as the Lions search for new opponents to play on Saturday after Covid-19 accounted for the Bulls, as well as the Springboks' clash with Georgia on Friday, but there was little evidence of anxiety on the pitch. 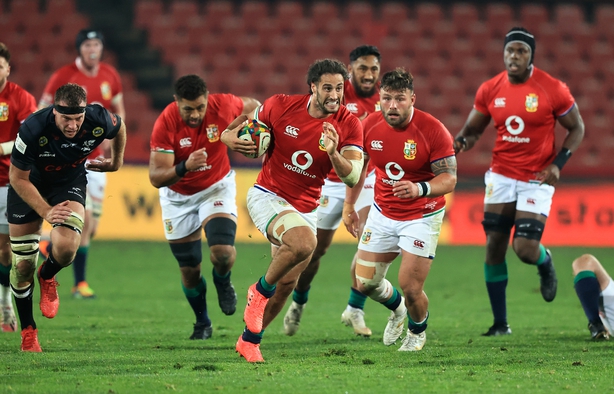 After a brief warm-up due to the team arriving late as part of an extraordinary build-up to the second fixture on South African soil, they rolled up their sleeves and got stuck into the Sharks.

Josh Adams celebrated his third start in three games with another try, while Duhan van der Merwe showed he is also a serious contender for a wing slot in the Test series by crossing twice.

Bundee Aki powered over and Farrell was conducting operations with calm authority against a tenacious but outgunned Sharks team that had lost nine players to the Springboks squad, including captain Siya Kolisi.

Farrell departed with a possible shoulder injury and after a spell of Sharks ascendency Rees-Zammit made his mark while Adams and Van der Merwe went to complete their hat-tricks. Adams has now amassed eight tries on tour.

It looked bleak for the Sharks as early as the eighth minute as Farrell pulled the strings in a high-tempo start complete with offloads and fizzling long passes.

Adams and Van der Merwe went over as a 14-0 lead opened up and after weathering a bright spell from their opponents with help from a timely Tom Curry turnover, the Lions advanced downfield with a break by Elliot Daly.

Luke Cowan-Dickie failed to ground the ball over the line but the third try arrived in the 26th minute when Farrell spotted an unpatrolled backfield and kicked ahead for Van der Merwe to grab his second. 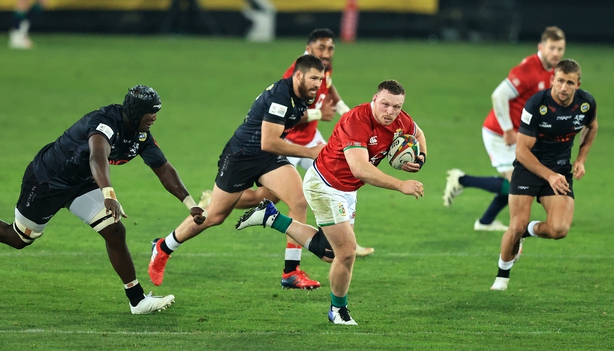 Successive scrum penalties gave the Sharks a rallying point around the set-piece but it was their only meaningful foothold in the game and as Sam Simmonds surged into space they came under pressure once more.

Aki powered over from close range after a line-out drive, but the Lions lost their way early in the second half as Curry knocked on with the try-line beckoning and Farrell gave the ball away.

Enterprising play from the Sharks saw James Venter touch down and provincial tails were up until bad luck at a ruck enabled Adams to hack forwards and score.

Rees-Zammit switched on the afterburners to cross after Adams made headway and inevitably van der Merwe and Adams grabbed their hat-trick tries as the home defence fell to pieces.