In a season when his decade-long dominance of Ireland's scrum-half jersey appeared to be waning, Conor Murray now takes centre stage as Lions captain.

Even steadfast supporters in this country would not have anticipated such a promotion given he has never skippered Ireland or his province Munster.

Although an onfield general entrusted with directing operations alongside long-term half-back partner Jonathan Sexton, he has been persistently overlooked for leadership.

When Sexton was ruled out of matches during the recent Six Nations by concussion, head coach Andy Farrell chose Iain Henderson to take command with James Ryan's absence through injury removing him from the frame. Murray, a veteran of 89 Ireland caps, was not in the running.

But Warren Gatland's flair for the unorthodox has provided the greatest individual accolade of his career as the 32-year-old assumes responsibility for uniting four rival nations.

While his leadership credentials are unproven, his playing expertise is well established and a fit and in-form Murray remains the best number nine in Britain and Ireland.

A pinpoint kicking game, an excellent command of the basics and calm authority are his foundations, but he is also unusually physical for his position with his tackle count around the fringes an asset for the looming series against the Springboks.

And with his hoard of caps that include five for the Lions across the previous two tours, his very presence is enough to trouble the minds of opponents.

Yet all players eventually see their powers wane and it was during last year's Autumn Nations Cup that he was forced to fight off the emergence of Jamison Gibson-Park as Farrell looked for alternatives. 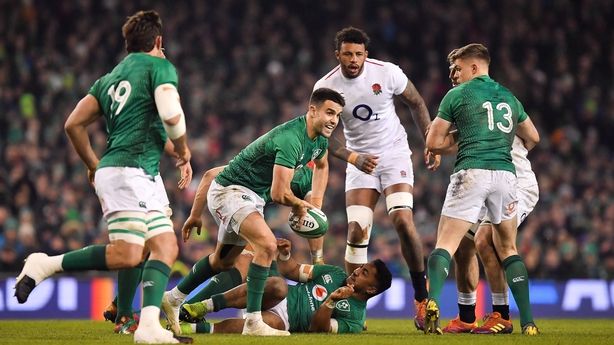 Gibson-Park was preferred for the Wales match and having struggled against the same foes in the opening round of the Six Nations in Cardiff, Murray missed matches against France and Italy because of a hamstring injury and then remained an unused replacement for the Scotland clash. His status as first choice no longer looked unassailable.

It was against this backdrop of a player with questions to answer that he excelled in a rout of England, extinguishing doubts over his fading influence and guaranteeing his place on the plane for South Africa.

Gatland was in Dublin to watch a performance that may, in the Kiwi's mind, have sealed Murray's mastery of the Lions nine jersey.

And working closely with his new captain once more at the squad's Jersey training camp and seeing his interaction with his team-mates has clearly also left impression in a remarkable twist to a tour that is only one game old.