Ireland have made history by beating France 28-19 at the World Rugby Sevens to secure their ticket to the Tokyo Olympics.

Anthony Eddy's side defeated the favourites at Stade Louis II, and will next month become the first Irish rugby team to compete at the Games.

The side had qualified for the final courtesy of a 21-7 victory over Somoa before they defeated Hong Kong 28-5 in the semi-final.

France had started the afternoon in fine fashion as their women's team defeated Hong Kong 51-0 in front of their own fans, and there were high hopes of a double success.

However, it was Ireland who made the better start as Terry Kennedy showed a great bit of pace to sneak down the short-side unchallenged to put his country ahead.

Eddy’s men were 7-0 up as the half-time break approached, but after a bout of home pressure, Stephen Parez showed good footwork to evade a tackle and touch down.

Things would go from bad to worse seconds later as France got in for a second try. A high restart saw Remi Siega collect well and he brilliantly off-loaded to the advancing Paulin Riva who was left with an easy run in.

That left France 12-7 ahead at the switch, but the home side would not score again until the final play of the match.

Instead it was Ireland who grasped the opportunity midway through the half. Kennedy again played a key role as he reacted quickest to a loose ball to send Jordan Conroy on his way and after evading two tackles, the top try scorer in the tournament out-paced two covering French players to score.

Billy Dardis had an easy conversion to leave Ireland 14-12 in front and it would get even better as Kennedy linked up with Conroy once again with the latter touching down in the corner. Dardis’s tough conversion just landed the right side of the post.

With less than a minute remaining, Ireland sealed their passage to the Olympic Games as Dardis collected a loose French pass and put Harry McNulty in for the game-sealing score.

Terry Bouhraoua did score a late try for France but broke down in tears as he placed the ball down with the home side’s Olympic ambitions ended by a stunning Irish performance. 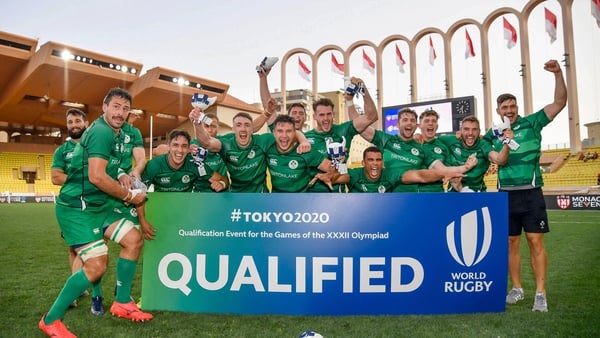