It has been the most unusual season for Ireland's Under-20s crop but Cathal Forde has been keeping good company.

The lockdown and subsequent disruption to the normal season has meant that Academy players have had to adapt and make do.

And out west, Forde, the Connacht Academy captain, has been training with the seniors and feels it will benefit when their Six Nations campaign kicks off this afternoon against Scotland.

"Yes, I got a few weeks with them throughout the year," says Forde, who is selected at centre for the 2pm kick-off (live on RTÉ One and RTÉ Player).

"Obviously I got massive experience from the likes of [Ireland internationals] Jack [Carty] and Bundee [Aki].

"They have been fairly helpful to my game. Bundee knows his stuff and he has been great to me.

"I'm always looking for fixes for my game and if they spot them, they’ll call them out to me, give me a few tips." 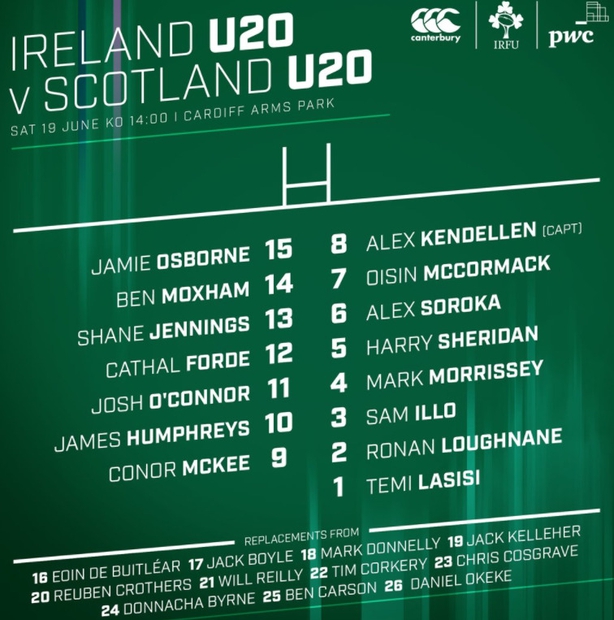 Ireland were Grand Slam champions at this level in 2019 and had three wins from three under their belt before the shutdown in March 2020, when Forde was also part of the squad.

The Under-20s have long been associated with an exciting style of rugby and Forde expects that to continue under new head coach Richie Murphy.

"We have license to play what we see in front of us, play heads-up rugby," says Forde.

"Obviously we have our shape on the back of that – all that comes from the coaches. It is a case of enjoying our rugby and going out and give a performance.

"We have had five Eagles games and we got a few Sevens tournaments in which was good fun but not too much. That is pretty much it."

Forde, who didn’t see any game-time before last season’s campaign got cut short, also detailed his sporting upbringing and his path to the pinnacle of age-grade rugby.

"I started off in Corinthians at Under-9s level and played there until Under-18s and also played in the Jes (Coláiste Iognáid) and got massive experience there," he added.

"I’d say I started to take it a bit more seriously when I got to Senior Cup level with the Jes.

"I got brought into the sub-academy last year and got selected for last year’s Six Nations squad so I was happy with how the year went and obviously I got into the academy off the back of that, so it has been good."