Retiring duo Scott Fardy and Michael Bent bowed out on a winning note as Leinster closed out the Guinness Pro14 Rainbow Cup with a bonus-point victory over the Dragons at the RDS.

With supporters making their long-awaited return to the Ballsbridge venue, tries from Jimmy O'Brien, captain Garry Ringrose and Jordan Larmour had the hosts 19-7 ahead at half-time.

Last week’s defeat in Glasgow had ended Leinster’s interest in the competition, but they finished with a flourish thanks to a Ryan Baird blockbuster, Larmour’s second and a 65th-minute closer from Scott Penny.

This was the first Leinster home game with a crowd since February of last year, as 1,200 supporters – including 100 staff from the nearby St Vincent's University Hospital – watched on as part of the Government-sanctioned test events.

The Dragons were first to threaten but Leinster opened the scoring, using clean lineout ball to flood out to the left where Hugo Keenan released O’Brien to score. Ross Byrne landed the first of his four conversions. 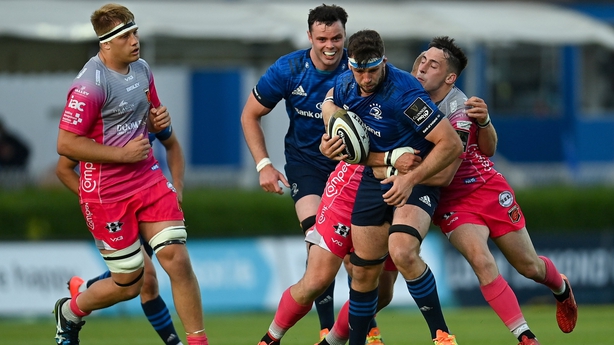 Their second try followed in the 14th minute, man-of-the-match Caelan Doris launching a high-quality long-range attack that ended with Ringrose reaching over past two defenders.

Number eight Doris was again prominent before Ringrose and Byrne put Larmour in at the right corner, making it 19-0 with 20 minutes on the clock.

Kelleher’s yellow for a high tackle on Ross Moriarty allowed the Dragons to press. However, Doris brilliantly held up Williams who, following a Josh Lewis break, had looked destined to score.

The Dragons forwards, including Brok Harris on his final appearance, soon went the direct route, paving the way for fly-half Davies to dart over from close range.

Following both teams’ rather listless finish to the first half, Baird burst through in the 42nd minute. He combined with Jamison Gibson-Park to outfox the Dragons rearguard and delight the home fans with a splendid two-man score.

Replacement Taine Basham made his presence felt in Moriarty’s absence, while a potential second try for O’Brien was ruled out by a Doris knock-on.

There was no denying Larmour on the hour mark, with Keenan providing the assist after a fine skip pass by Gibson-Park. Byrne’s conversion from far out bounced wide of the post.

Byrne converted with aplomb to supplement flanker Penny’s powerful burst down the left, leaving a lopsided look to the scoreboard given Dragons’ doggedness across the 80 minutes.