Gavin Coombes scored four tries as Munster secured second place in the northern section of the Guinness Pro14 Rainbow Cup with a convincing 54-11 victory over Zebre in Parma.

Munster had been in with a chance of progressing to the final until Benetton's clash with the Ospreys in Bridgend was cancelled due to coronavirus cases in the Welsh region’s squad.

The men from Treviso were awarded the four points as a result, moving above Glasgow Warriors and out of Munster’s reach to secure their place in the showpiece.

Coombes and Craig Casey scored two first-half tries apiece in front of around 1,000 fans as Munster took a 22-point lead into the break, before Niall Scannell and Liam Coombes added their names to the scoresheet in the second half and the number eight’s quartet was completed.

Joey Carbery contributed six conversions from six attempts, while Federico Mori crossed for Zebre’s only try midway through the second period as the Italians ended the competition bottom of the table.

Zebre started brightly but it was Munster who got over for the opening score after 10 minutes, when Gavin Coombes powered over from close range and Carbery added the extras.

Occasional bursts forward from the home side gave Munster something to think about and their efforts were eventually rewarded with two Carlo Canna penalties that reduced the deficit to a single point.

The visitors soon re-established daylight, however, showing good hands to spread the ball wide to the right before Casey touched down in the corner and Carbery split the posts.

Gavin Coombes then collected the ball at the back of a lineout to charge over for his second five minutes from half-time, and there was still time for Casey to dot down under the posts for the bonus point before the interval. 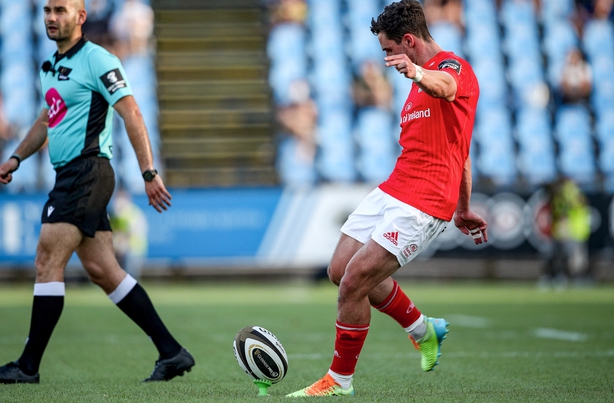 Carbery stayed perfect from the tee to open up a 28-6 lead at the end of the opening period.

Scannell touched down from a lineout maul early in the second half, with Carbery again on target before the fly-half hauled down Federico Mori at the other end with a try-saving tackle.

There was no stopping Mori three minutes short of the hour, though. Following a period of pressure on the Munster line, Zebre spread the ball out wide for the centre to twist and turn his way over for the hosts’ only try.

Mori’s joy was shortlived as Liam Coombes intercepted his attempted chip to race for the line and Carbery kept up his conversion record before clocking off for the evening.

Gavin Coombes then capitalised on a fortunate bounce of the ball to go over under the posts, with Jake Flannery picking up where Carbery had left off by adding the conversion.

The number eight completed the scoring after the 80 and second-row Billy Holland – making his final appearance for the province – was wayward with a rare attempt from the tee.