Andrew Porter has time on his side and could feature on two Lions tours in the future, according to Stuart Lancaster.

The 25-year-old Leinster prop had to withdraw from the upcoming tour of South Africa after injuring his toe in last weekend's Guinness Pro14 Rainbow Cup clash against Glasgow.

With Porter unavailable until the club pre-season, England’s Kyle Sinckler has been called up to Warren Gatland's squad.

"It was a rare one, he was just running and stepping and it created a small fracture in his toe," senior coach Lancaster told RTÉ Sport.

"It wasn’t a specific impact injury, there was nothing specific on the injury and there was no underlying aggravation beforehand so it’s quite a hard one to understand.

"We got back to Ireland and got it x-rayed and it was apparent. It’s not a major thing. It’s not a 12 or 16-week job but it’s enough to keep him out of this tour, which is a real shame. 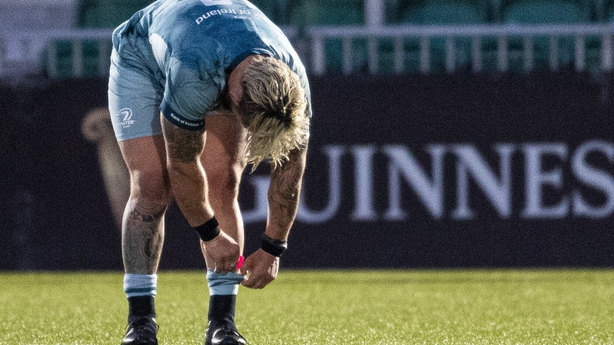 "It’s happened, and to say we are all gutted would be an understatement. We’re absolutely devastated for him. When you think about what a fantastic season he’s had and the consequences of missing out on the tour.

"It was just one of those things, there’s nothing really that could have been done differently."

Porter has enjoyed a rapid rise to the top of the game. The Dubliner made his Ireland debut in 2017 and has won 37 caps, with his form for club and country over the last two seasons bringing him into Lions contention.

Lancaster has backed Porter to quickly get over his disappointment.

"He’s been here today and he’s remarkably, not upbeat, but stoic in terms of the disappointment he must be feeling, it’s incredible really," continued the former England head coach.

"It’s the way he’s made up, he’s a very tough resilient young man. He’ll always look for the positive in anything.

"He’s 100 % committed to what he’s doing and that’s why it hurts for everyone, his family and friends and everyone who’s supported him throughout his career is equally as disappointed.

"There’s nothing positive at the moment other than it’s not a long-term injury, he’ll be back fine for pre-season.

"He’s got a fantastic career ahead of him and I’d be very surprised if he’s not there or thereabouts in four years’ time and potentially in eight years’ time given his age."

Meanwhile, Tommy O'Brien, who injured his hamstring in the warm-up for the same game, has been ruled out of this Friday's clash with Dragons, which will see supporters returning to the RDS for the first time since February of last year.

Leinster intend to allow a crowd of 1,200 into the Ballsbridge venue, of which 100 will be made up of frontline staff from St Vincent's University Hospital.

The province said in a statement that this is "in recognition of all their work over the previous 15 months".

Elsewhere, Jamison Gibson-Park, Adam Byrne and Harry Byrne are all returning from hamstring injuries and will be monitored this week before a decision is made on their inclusion in the squad, while captain Johnny Sexton will be assessed later in the week.

Conor O'Brien is set to increase his training load as he continues his recovery from a long-term knee problem.