A free-scoring first half gave way an entirely scoreless second half but Connacht held off Ospreys to claim a 26-19 win in the Guinness Pro14 Rainbow Cup at the Sportsground this evening.

The hosts had to absorb a concerted wave of attacks in the closing 10 minutes but stubborn defence prevented an Ospreys breakthrough before replacement scrum-half Kieran Marmion sniffed out a turnover.

There were no fewer than seven tries in a thrilling, high-octane first half. Rhys Webb was sin-binned early, Connacht capitalising on their numerical advantage with centurion hooker Shane Delahunt scoring in the corner.

Flanker Morgan Morris responded for the visitors within five minutes but Connacht opened up a 21-5 lead in the following 10 minutes.

Bundee Aki raced onto a clever Caolin Blade grubber to score the home side's second try and, moments later, Ultan Dillane burrowed over under the posts. 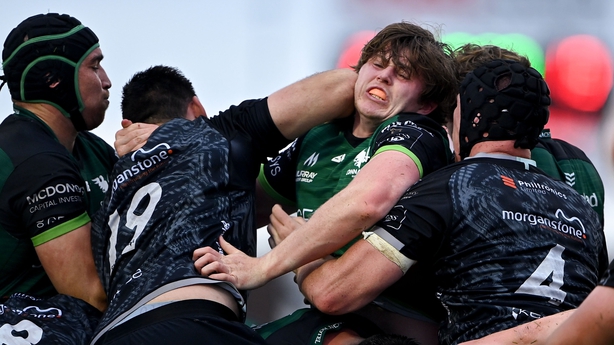 The scores continued to flow in breakneck fashion. Hooker Sam Parry scored from an lineout maul on 24 minutes.

The game half an hour old, Connacht had the bonus wrapped up but then duly failed to score for the rest of the game.

Fortunately, Ospreys wouldn't score past the 40th minute either, Sam Parry grounding for his second score after a five-metre scrum.

Dominic Robertson-McCoy was yellow carded on the stroke of half-time - after which Parry scored the Welsh region's third score - but Connacht survived the opening 10 minutes of the second half unscathed and thereafter held on in a tight second period to grind out a win, their third of five in the Rainbow Cup.