La Rochelle head coach Ronan O'Gara said his side shot themselves in the foot in their Champions Cup final defeat to Toulouse.

Toulouse edged out their rivals in an all-French final in front of 10,000 fans at Twickenham, a red card for Levani Botia seeing their opponents reduced to 14 men in the first half.

Toulouse were still second best up front for the 80 minutes, but Juan Cruz Mallia's try helped them to a 22-17 victory, despite Tawera Kerr-Barlow’s late effort for La Rochelle.

"It was going to be tough, but we made it too tough," said former Ireland international O'Gara.

"We were inaccurate and indisciplined in the first 40 minutes, irrespective of the red card.

"It was a red card and we played the rest of the game with 14, but you saw what it meant to the lads and how they dug in for each other which is pleasing.

"He (Botia) doesn’t go out there intending to get a red card. He hit high which equals a red card. We are trying to make the game safer.

"We’ve no complaints. We wanted to be better with the ball and we were at the end, but didn’t do it consistently for 80 minutes. It was all about Europe – it’s a special competition.

"There are so many positives. It was a slow and wet game which didn’t suit us, but losers make excuses and we weren’t good enough. There was a cup to be won."

Back row Jerome Kaino said Toulouse were motivated by the club's past successes as they became the first team to win five Heineken Champions Cup crowns.

Kaino said: "I’m absolutely stoked and it didn’t come easy. I’m glad we got over the line.

"The pressure comes from day one when you walk into the club and you’re quite aware of the golden years. It’s a relief and feels great to get that fifth star. I’m proud of the boys.

"I have to take my hat off to La Rochelle. I think the red card galvanised them.

"It was a traditional final as it went all the way down to the wire. For us, it was a huge motivating factor to try and live up to the standard which had already been set."

Toulouse captain Antoine Dupont was crowned European player of the year after the game.

The France scrum-half said: "It’s been a very tough year with all the Covid-19 restrictions, but since the beginning it’s been a major target to win something and today we did it. I’m really pleased." 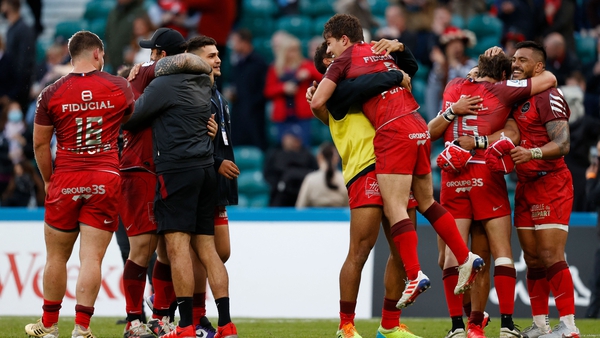