RG Snyman's Munster return has been delayed by "a number of weeks" after the South African suffered another knee injury.

Munster had expected that the 26-year-old would re-join squad training at the end of April, however, they have announced that he is to have another knee operation.

"There is unfortunate news for RG Snyman as he suffered a setback during the last block of his rehabilitation," a statement read.

"He will see a knee specialist this week and will undergo a minor procedure on his knee after suffering an unrelated injury.

"This will delay his return to training for a number of weeks." 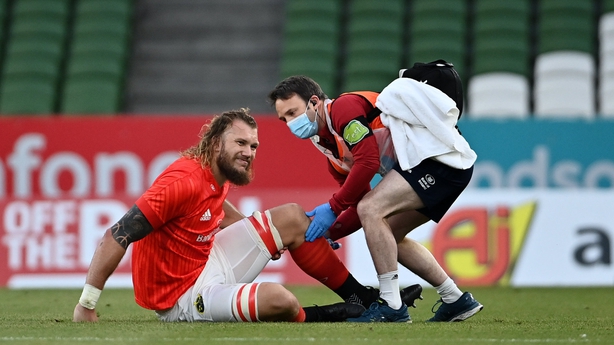 Speaking to reporters this afternoon, Munster defence coach JP Ferreira said: "He was training and rehabilitating, he has done a couple of things with me defensively and then also some agility stuff.

"He was literally just running and he felt something in the knee that wasn't right and then stopped.

"The doctors assessed him and took him to the specialist. He’s got his operation in the week and then the medics will obviously assess him and we will take it from there.

"It’s not great news, but he has got a strong will and a strong mind, so it’s just something that has come along in his path. Hopefully he can get rid of it as soon as possible."