The ACT Brumbies will defend their Super Rugby AU title against the Queensland Reds in Brisbane next week after beating the shorthanded Western Force 21-9 in a tight semi-final play-off in Canberra on Saturday.

The Force, playing a first play-off in their 16 years of existence, fought to the bitter end but playing for 20 minutes with only 14 men after Toni Pulu was shown a red card took its toll in such an attritional battle.

Former Leinster and Ireland full-back Rob Kearney missed out for the Force through injury. 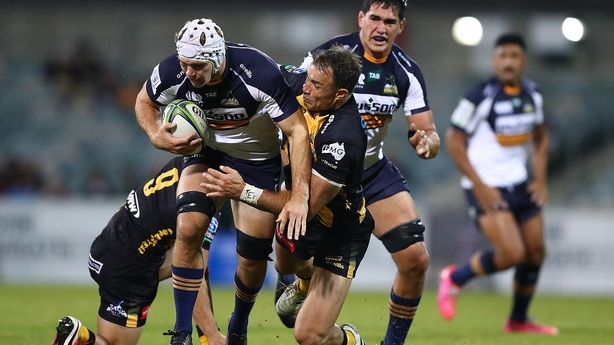 The 35-year-old hasn't played since injuring his adductor on 20 March, though was named to start in last week's pulsating 30-27 win over the high-flying Queensland Reds, Force’s third win on the bounce.

He was a late change in personnel, though Force coach Tim Sampson remained confident the 95-cap Ireland international would return for the semi-final, but the Louth man failed to prove his fitness.

Elsewhere, the Auckland Blues were given a scare by an understrength Waikato Chiefs side but rallied to finish their Super Rugby Aotearoa campaign with a 39-19 bonus point victory at Eden Park.

A fourth win of the season put the Blues level on points with the Chiefs but the visitors were already assured of second place and a spot in next week's championship final because of their five previous wins.

The match was a double-header preceded by New Zealand's first women's Super Rugby match between the same two clubs, which the Chiefs won 39-12.

Meanwhile, a Japan Top League play-off quarter-final fixture between Ricoh Black Rams and Suntory Sungoliath scheduled for 9 May has been cancelled after 22 players from Ricoh tested positive for Covid-19, Kyodo news agency reported.

Japan last month declared "short and powerful" states of emergency for Tokyo, Osaka, Kyoto and Hyogo as the country struggles to contain a resurgent coronavirus pandemic.

The country hosts the Olympic Games from 23 July to 8 August.