One issue facing the British & Irish Lions in the lead-up to this summer's tour to South Africa was when all players would be available for the build-up.

The availability of Premiership players was the most pressing one due to the timing of the Grand Final but on Tuesday, the English league and the Lions finally came to an agreement about the release of that cohort of players in time for the warm-up game against Japan which is due to take place on 26 June.

While that sticking point is now solved, the uncertainty has not been ideal for Lions head coach Warren Gatland as he prepares to name his squad for the 3 July to 7 August tour.

Donal Lenihan was the team manager for the 2001 tour to Australia and just before joining Bernard Jackman, Wes Liddy and Hugh Cahill on this week's RTÉ Rugby Podcast, he made a short trip up to his attic to dig out the manager's report he authored which included the recommendations he felt were needed at the time to improve the Lions' lot. 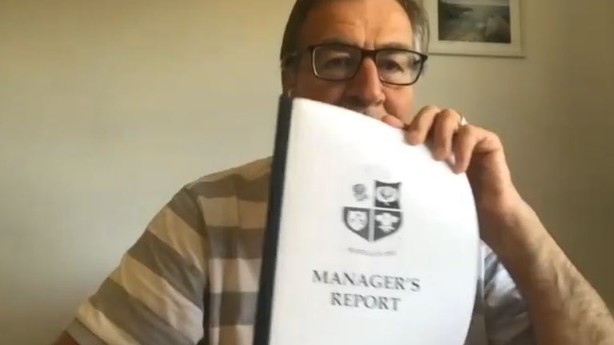 But after reviewing his recommendations 20 years on, he feels little has changed.

"I've said it for years. The four home unions run the Lions and yet every four years, we send them off with one hand tied behind their backs, playing against in many cases the world champions who have been together for 2-3 years and you flog them all into a bowl and hope you get something out of it by the time the first test arrives," Lenihan told the podcast, before showing a copy of his manager's report.

"I looked at the recommendations (in my report) - because Warren Gatland has been giving out about this for 8-10 years - and I went into the section 'Recommendations' and things I spoke about 20 years ago now are still an issue in terms of players release, in terms of adequate preparation time and it's an absolute mess.

"Like, the Lions are set up to fail. The fact that they have been successful in the last three tours is a testament to the players and the management because every single obstacle is put in your way. It comes back to money in a lot of cases."

Lenihan added that he could understand clubs involved in the Premiership's latter stages being keen not to release players until their own domestic commitments are ticked off.

"But all the players from other clubs whose seasons are effectively over, the fact you've to haggle to get those players available to come into camp, it's incredible really," he continued.

"And the fact that for the third or fourth tour in a row, the Premiership final in England is on the Saturday and the Lions head off for the tour on the Monday morning, it just beggars belief.

"I remember speaking to Johnny Sexton about this - the same thing happened in New Zealand fours years ago. They played the first game against a provincial XV up in the North Island - if you remember, Warren Gatland's son was the out-half for that provincial Barbarians team - there were about five or six Lions players going to the match who fell asleep on the bus and if you remember, they were lucky to win the game against Mitre 10 players, the third tier in New Zealand.

"If you had lost that opening game on the tour, all of a sudden it puts massive pressure on you. But that is the type of organisation that has been put around the Lions and yet they play such a massive role - 40,000-50,000 people travel to watch them.

"They've become the financial saviours once every 12 years of New Zealand, Australia or South Africa. They give them the financial boost that keeps them going for another few years and yet they're treated like this.

"I feel very passionate about it because I think they get no support from within the group that are supposed to be running the Lions and that for me is shambolic."