Last week's Player of the Match, Hannah Tyrrell is itching to get back out on the field and show that the stellar performances of both herself and her Ireland team-mates in their opening 45-0 win over Wales last weekend, was not just a once off.

"France are ranked fourth in the world at the moment and for us to go out and beat them just shows people that last week wasn’t a fluke performance," she told RTÉ Sport.

"We have upped our game and improved and we’re well able to take on anybody who stands in our path, no matter who you are."

The out-half led the charges against a poor Welsh side last weekend, coming away with a personal tally of five conversions and Ireland’s seventh try in the 80th minute.

"I was very nervous leading up to the game after not playing together for so long and I was wanting to put in a good performance. We all knew what we were capable of, we just had to go out there and do it," said Tyrrell.

"We started with a really high intensity and took it to them in the first minute and reaped the rewards of that."

With two of the younger squad members, Béibhinn Parsons and Dorothy Wall once again putting in bone-shuddering performances last weekend and getting themselves on the scoresheet, there is a sense that this Irish squad is edging towards its peak potential.

With the likes of Tyrrell, Lindsay Peat and Ciara Griffin providing a solid backbone of experience, the fearlessness of youth is allowed to flourish and is causing damage right across the pitch.

"It’s great to see the talent coming through," said Tyrrell.

"It’s just phenomenal to see the skills that they have. The effort and the workrate that the young girls put in and when you pair that with the skills of the experienced players, they just have wonderful relationships.

"We’ve had a lot of sevens players come into our squad and we’ve enjoyed that integration. We’ve phenomenal talent now within our squad with different players bringing different skills.

"In this team whether you’re 7s of 15s, we’re one big family. We’re all looking to learn off each other and have a great time.’

An ex-Dublin GAA goalkeeper and retired sevens player, Tyrrell has an abundance of experience in sport. However, her new role as Adam Griggs’ number ten is one that she has had to work on in recent seasons.

"It’s definitely been a challenge. I was comfortable playing winger or full back and when Adam asked me to think about transitioning to ten I was a little taken aback. It was quite daunting.

"When I started playing, Nora Stapleton was the out-half. For me, she’s a huge role model not just for the number ten jersey but for Irish rugby in general.

"I’ve been really, really enjoying it and the new learnings and leadership that comes with it.’

"I’d like to consider myself a ten now. I’m quite ambitious. I want to prove to people that I can be a pretty good out-half to this team." 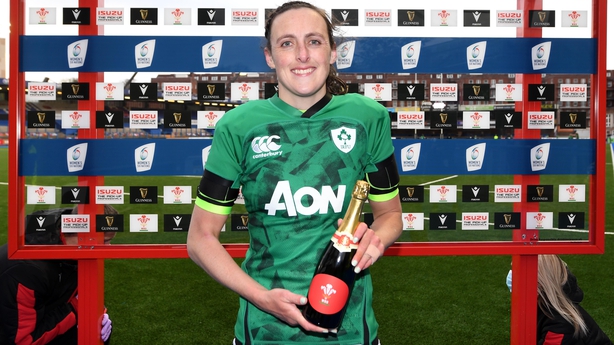 The disruptive nature to the 2021 Women’s Six Nations continued to haunt squads this week.

On the same day that Ireland got their campaign off to a flying start in Cardiff, it was announced that France was to be added to Ireland’s mandatory quarantine list putting the squad’s second test match at home in jeopardy.

A Government exemption announced on Monday allowed for the French players to fly in and out of Dublin to honor the fixture and just as of this afternoon, athletes are now legally exempt from hotel quarantine laws.

The uncertainty of fixtures is something that Tyrrell and the squad have learnt to remain unconcerned about. In a true ‘number ten’ tone, Tyrrell’s leadership sets the focus on results and controlling the controllables.

"For the past year there’s been disruption both on and off the pitch and we’re used to it by now," said the Old Belvedere player.

"For us, the focus is on the game itself and anything else outside of that like where it’s going to be played or when it’ll actually be on is something that’s very much beyond our control so we’ve just ignored that and got on with our own game.

"Wherever it’s played, we’re just happy to get out and get going."