Ronan O'Gara's La Rochelle have reached the Champions Cup semi-finals thanks to a 45-21 win over Sale at Stade Marcel Deflandre.

Two tries in the opening 12 minutes of the second half from wing Raymond Rhule put paid to Sale's hopes and ensured La Rochelle reached the last four of the competition for the first time.

The home side scored two tries in the first half to build up a nine-point lead, but Sale hit back with a great score of their own on the stroke of half-time to the gap to two points and kept the game in the melting pot.

But then came Rhule's double, followed by two more from centre Geoffrey Doumayrou and the French side were on their way to the final four.

Sale were not as sharp as they had been the previous weekend when they tore the Scarlets to shreds with six tries in a 57-14 demolition at Parc y Scarlets. 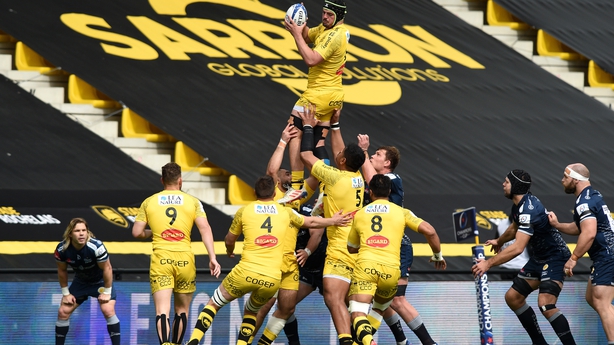 Sharks fly-half AJ MacGinty, who had hit the target 11 times out of 11 seven days earlier, missed with his first shot at goal before giving his side an eighth-minute lead.

He swapped two penalties with opposite number Ihaia West before La Rochelle notched the first of their six tries in the 28th minute.

A towering up and under from West was not dealt with by Simon Hamersley on his 22 and the home side regained possession. West kicked cross field from right to left and found number eight Victor Vito loitering in the wide open spaces. The former All Black went into contact and somehow passed the ball around the back of his tackler to release fellow back-row man Greg Alldritt for a superb score.

MacGinty's third penalty of the half pegged it back to a two-point gap, but on the stroke of half-time a blindside raid on halfway by Sharks scrum-half Faf de Klerk came to grief.

As he tried to release Marland Yarde, his pass was knocked down, and backwards between his legs, by La Rochelle wing Dillyn Leyds. He picked up, pinned back his ears and raced to the right corner for a try that West improved off the touchline.

That looked like being decisive, but the Sharks had other ideas. Slick handling down their back line, and a great support line from centre Sam James earned them a try with the last move of the first half.

MacGinty missed the conversion, but Irish referee Andrew Brace gave him a second shot after spotting Will Skelton shouting at him as he ran up to kick. This time he made no mistake and the gap was back to two points at the break.

However, La Rochelle hit their opponents hard at the start of the second half and Sale's hopes of a semi-final appearance disappeared.

Rhule raced away for his two tries before Doumayrou matched him with two of his own as he emerged on the end of two more great handling moves to complete the job.

Byron McGuigan's late consolation try for the visitors did little to hide the fact Sale had been dominated physically and outgunned behind.