France needed to score four tries and beat Scotland by 21 points to deny Wales the title but the visitors stunned their hosts with a 27-23 victory.

Two tries from Van Der Merwe and one from replacement hooker Dave Cherry secured Scotland's first win in Paris since 1999 despite seeing cards for Stuart Hogg and Finn Russell.

Brice Dulin, Damian Penaud and Swan Rebbadj crossed for the hosts but they never looked like building up the head of steam needed to deliver a double blow to Wales after dramatically denying Wayne Pivac's side the Grand Slam six days earlier.

It was another rare away win for the Scots following triumphs in Wales and England in the past six months.

A fitting end to a glorious Championship.

The result means that Ireland finish in third place, which is worth about €2.5million in prize money, staying just ahead of Scotland on points difference.

Scotland were quick to put pressure on and France showed the type of ambition they would need when they took a quick throw and tried to play their way out of trouble after Russell had kicked the ball into touch two metres from their try line.

The home side soon exerted some pressure but all they had to show for it was Romain Ntamak's ninth-minute penalty.

Scotland soon gained the ascendancy and twice elected to kick two penalties into touch inside the French 22.

Hooker George Turner was held up just short of the line each time as he charged from the back of the lineout maul, but Van Der Merwe forced himself over the second time in the 15th minute.

There were suspicions of double movement but referee Wayne Barnes gave the try without opting to take a second look. 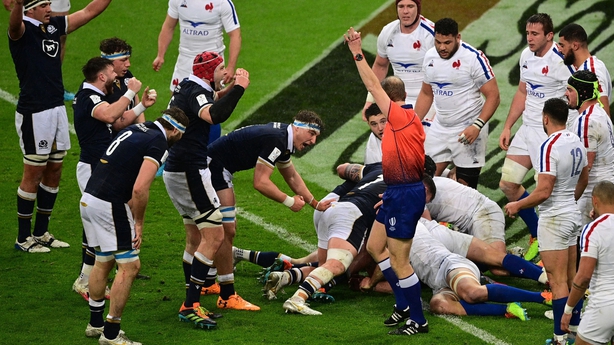 Russell added the two points and produced another brilliant long kick which held up a metre short of the try line. The Scots descended upon their opponents and Jamie Ritchie forced the penalty from Dulin, which Russell kicked over to put Scotland seven points up.

Another huge kick into touch from Hogg put France on the back foot but the hosts reduced the deficit when Ntamak kicked a long-range penalty following a scrum infringement.

The home side got on top around the half-hour mark and Scotland gave away a series of penalties in front of the post.

The pressure told when Van Der Merwe sold himself too early following a long throw out wide from Antoine Dupont. 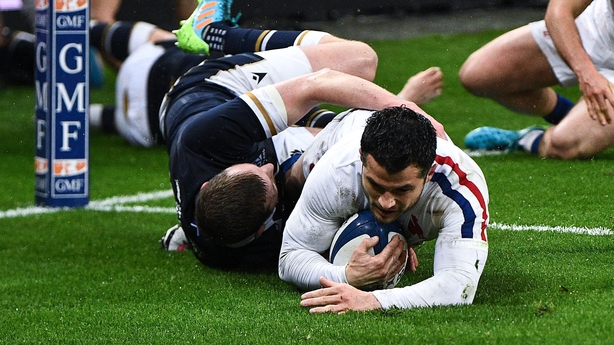 Penaud passed inside for Dulin to cross in the 36th minute and Ntamack brilliantly converted.

Scotland restricted France's scoring to five points during Hogg's spell in the sin bin, when Penaud collected Virimi Vakatawa's offload, lobbed the ball over Ali Price and touched down in the corner. 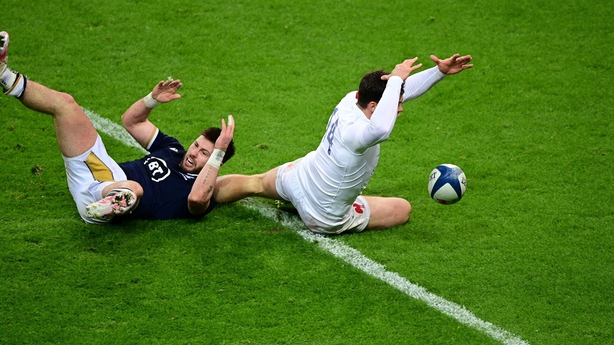 Scotland regained control after the numbers were evened up. Russell kicked a close-range penalty and Sam Johnson was stopped five metres from the line after bursting forward following another successful lineout.

It was France's turn to ship a series of penalties and Cherry scooped up a loose ball following a lineout before nipping through a gap and over. Russell converted to put Scotland back in front. 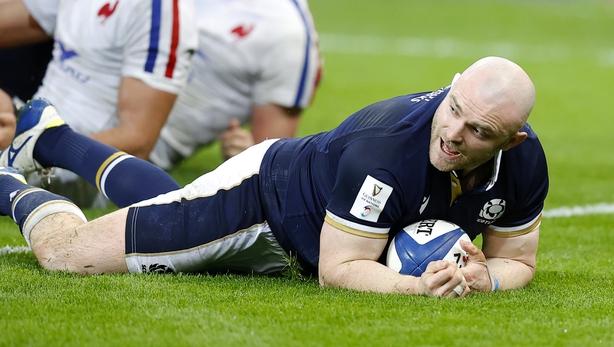 Rebbadj went over five minutes later but Ntamack missed the conversion and Scotland passed up a good chance to kick themselves level in favour of kicking into touch, but Cherry's lineout was stolen.

Gregor Townsend's side were still piling on the pressure when Russell was sent off in the 71st minute after catching Dulin near the throat with his elbow as he attempted to fend off the full-back.

Any hopes of another stunning finish from France were undone within two minutes when Baptiste Serin was yellow-carded and Scotland again opted to push for the try instead of going over the posts.

France actually won possession with the clock in the red but inexplicably decided to run from deep and conceded a penalty. Scotland took full advantage.

The pressure was relentless and Scotland finally got over when they found winger Van Der Merwe on the left.

Adam Hastings added the points to round off a dramatic championship.