Ulster finished their Guinness Pro 14 season by running in seven tries in a 49-3 victory over a battling Zebre at the Kingspan Stadium.

The Irish province, already guaranteed second place in Conference A, will have seen this encounter as a valuable outing ahead of Easter Sunday's Challenge Cup last-16 game at Harlequins.

Skipper Jordi Murphy scored twice as Ulster racked up a second successive bonus-point win, although the complexion of the game was changed by the first-half sending off of Zebre's replacement hooker Marco Manfredi which reduced the Italians to 13 men for the remainder of the game.

Paolo Pescetto's first-half penalty was all Zebre could manage in response.

Ulster took the lead in the 12th minute when hooker Andrew got over for his seventh score of the season from a lineout maul which Cooney converted. 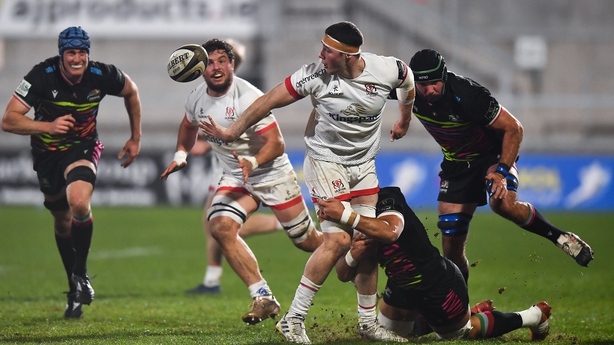 A poor kick-off reception led to an immediate response from Michael Bradley's side, with Pescetto slotting over the resulting penalty.

Despite Ulster coming close they were unable to score again and Zebre applied some pressure on the home side.

However, Manfredi was shown a red card by referee Andrew Brace in the 34th minute after following through with an elbow onto Cooney's face which led to uncontested scrums and the Italians reduced to 13 men.

The half ended with Ulster's second try when they switched the ball wide before Lowry finished off a move from which he handled three times. Cooney's conversion took Ulster 14-3 in front at the break.

That became 21-3 two minutes after the restart when Baloucoune trotted over and the bonus point was easily secured when Murphy eased his way over for another converted try.

Despite Zebre's brave efforts and determination not to completely fold, another Ulster score was inevitable and Murphy grabbed it off a lineout maul with Lowry converting. 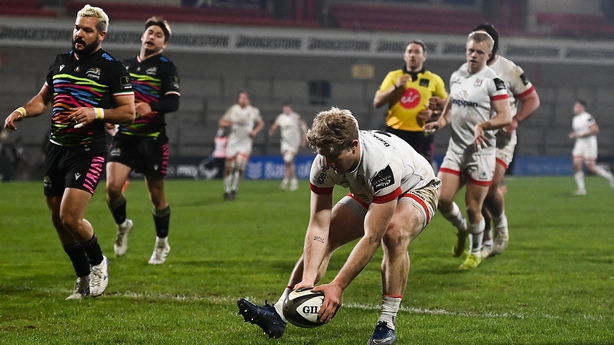 Lyttle got over from Lowry's cross-kick after 66 minutes to increase Ulter's lead further, with Lowry again adding the extras.

Zebre, to their credit, finished the stronger but were held up twice - with the floodlights failing on the first occasion - before replacement hooker Roberts got over for Ulster's seventh and final try as the home side broke downfield after lifting the late Italian siege.