Joey Carbery will make his first start in 14 months for Munster against Scarlets on Friday night in the Pro14.

Carbery made two appearances off the bench since recovering from long-term injury last month and will now make a further step up.

Mike Haley starts at full-back with Nash and Shane Daly on either flank.

There is a new-look centre partnership with Hanrahan and de Allende starting in midfield together for the first time.

Carbery is joined by scrum-half McCarthy in the half-backs.

The front row of James Cronin, Niall Scannell and Stephen Archer is unchanged.

Kleyn joins captain Billy Holland in the second row with Fineen Wycherley moving to the back row alongside O’Sullivan and Gavin Coombes.

Three academy players are among the replacements.

Back-row forward Alex Kendellen, who was playing schools rugby with PBC last season, is in line to make his Munster debut having played six games for Munster A this season.

Thomas Ahern, who has made four appearances so far this season, and Jack Crowley, who made his debut away to Ulster in January, are also included among the replacements.

Paddy Patterson is in line to make his Munster debut as he provides the scrum-half cover. 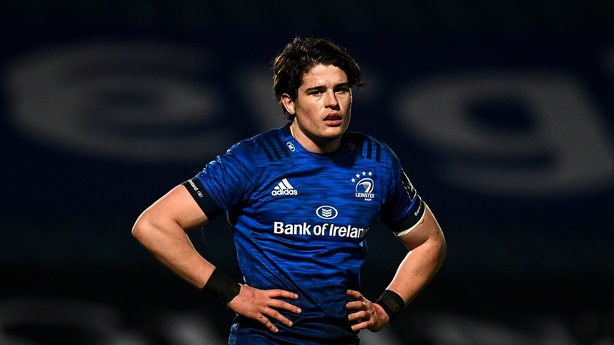 Seán O'Brien and Tim Corkery are in line for their own debuts if introduced off the bench.

Luke McGrath will once again captain the side

Academy player Max O'Reilly starts at full back, with Cian Kelleher on the right wing and Dave Kearney selected on the left.

In the centre, Leo Cullen has selected Rory O'Loughlin and Jimmy O'Brien as his pairing for the second week in a row.

Captain McGrath is partnered at half-back by Harry Byrne for the trip to Italy.

In the pack, Peter Dooley, Dan Sheehan and Academy prop Thomas Clarkson start in the front row, with Ross Molony and Jack Dunne in the second row. It will be Dunne's first start of the season.

In the back row, Josh Murphy starts at blindside, with last week's Player of the Match Scott Penny at openside and Soroka wearing No 8.

USA-born O'Brien started out playing minis with Greystones RFC before going to school in Blackrock College where he played on the Junior and Senior cup teams. He has three Ireland U-20 caps and is currently studying in UCD.

Corkery is from Bennettsbridge and went to school in St. Kieran's College. He played his club rugby with Kilkenny RFC.

He also played with the South East Area in the Shane Horgan Cup before progressing to Leinster representative honours. He has three Ireland U-20 caps to his name. Like O'Brien, Corkery is also playing his club rugby with UCD RFC.