Craig Casey was just four years old when Jonny Wilkinson dropped a goal to win the World Cup for England.

The England out-half finished up his career with four Six Nations championships, a Premiership title, two Heineken Cups and a Top 14 medal.

He is regarded as one of the greatest players to grace the game.

So when Johnny Sexton says he can't think of anybody else to compare the young Ireland scrum-half to, then it's quite a comparison.

The 21-year-old Munster player was benched as Ireland lost to France two weeks ago, failing to get on as the hosts chased a game they couldn’t catch.

But yesterday in the Stadio Olimpico, the Limerick native became an international, and to listen to the Irish captain, it’s just the beginning of the story.

"I didn’t know him that well obviously as I’d never played with him," Sexton told reporters when asked about Casey following the 48-10 win.

"He reminds me of what I've read about Jonny Wilkinson. That’s the only person I can relate him to. 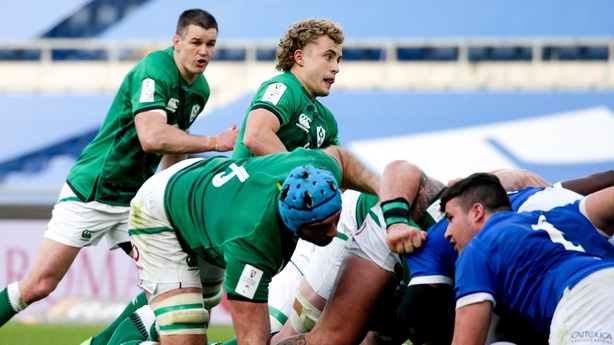 In a week that Sexton hinted that he might not be around for the World Cup in 2023, he was at pains to point out that he believes that Casey and Leinster lock Ryan Baird, who also debuted in the 63rd minute of the match, are exactly the kind of players Ireland need to reach the next level.

"We came in for some flak over the last few weeks but internally, as a group I don't think we’ve ever been more confident about where we are going and what we can produce," said the 35-year-old.

"With the coaches that we have, with the leadership group coming out of their shells and improving their leadership, I think that this group is on the right trajectory. Those two guys are going to play a huge part of it.

"Ryan was outstanding when he came on, his energy was incredible so the future is bright with those two leading the charge."

It was soon Casey's turn to face the virtually assembled media after the game and while he struggled to hear the questions over the din of various interviews taking place in the same room, his sheer excitement radiated through the laptops.

"It was everything I've dreamt of," he told RTÉ Sport. "It makes it a lot better to get the win so I'm delighted."

What did Johnny mean by comparing you to Wilkinson?

"He said this to me a few weeks ago," he laughed. "I think it's to do with obsessiveness with rugby. I'll take that compliment, yeah, being compared to Jonny Wilkinson, I'll definitely take that."

There remains a queue in front of the Shannon man. 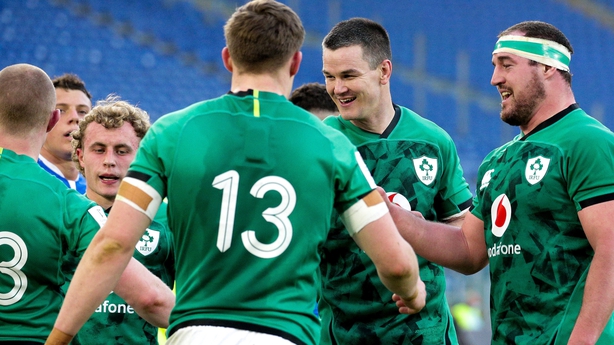 Leinster's Jamison Gibson-Park had the 9 shirt yesterday, while over in Connacht, Kieran Marmion, and up in Ulster, John Cooney want another shot. Luke McGrath, also at Leinster, was, until recently, the preferred back-up.

Asked if he’s one of those who can bide his time for more international action, he didn’t hold back.

"Of course I want to play games for Ireland, that's the goal," he said.

Unfair as it was, Gibson-Park was also asked about what Casey brings to the party.

"Yeah, look, he's a great young lad, one of the best work ethics I've seen in a young footballer...forever, probably, really," said the Kiwi, who won his eighth cap yesterday.

"I played with some good guys in New Zealand, obviously, but I don't think they were ever as dedicated as he is.

"Yeah, he's going to go a long way, there's no doubt about that."

Casey and Ryan were team-mates when Ireland U20s won the Grand Slam in 2019 and they had been well aquatinted before that having played on various underage sides.

"He was quality back then, then I went on to play with him the Irish U18 Schools and U20s. He's been class throughout," added Casey of 21-year-old Baird, who stands 6' 6".

"He's absolutely unreal, a freak athlete. He's ran over 10 metres per second, which is terrifying for a fella so big. He has all the capabilities to push on.

"I wouldn't say we joined up and motivated each other.

Head coach Andy Farrell was suitably impressed with their contributions and lamented that Covid-19 restrictions had meant their families had to watch their debuts from afar.

"I just said to them there, the two guys, I was waiting for their nerves to kick in all week," he said.

"They were nerveless and it was an absolute credit to them and to their families.

"In these Covid times I feel for the families not to be able to come out to Rome and see that experience because their sons were outstanding.

"They became men today. They'd gone about their jobs quietly all week and nerves never really set in at all.

"The only thing that I asked of them today was to be themselves and they were that in spades.

"I thought they were outstanding."