A welcome confidence-boosting performance in Rome saw Ireland pick up their first win of the 2021 Six Nations.

All the talk beforehand was about Ireland's stuttering attack and Andy Farrell’s side were finally able to cut loose against Italy, running in six tries at the Stadio Olympico.

There were a number of encouraging performances in the Ireland team, however the game has to be taken in the context of the opposition, and Franco Smith’s Italy were desperately poor here. Much tougher Tests lie ahead.

Here’s how we rated the players.

Hugo Keenan - 7
Ran a superb line for his first-half try and always looked lively, beating six defenders. The Leinster man is looking well settled in the 15 jersey now. Wasn’t asked many questions defensively, but did well to recover after misjudging a bouncing ball in the dying stages.

Jordan Larmour - 7
Brought a touch of class to Ireland’s attack, running a great line and freeing his hands to play in Will Connors for try number three. Will feel he could have done better in his tackle on Johan Meyer for Italy’s try before the break. Replaced by Keith Earls at half-time.

Garry Ringrose - 8
Good strength to burst through and score Ireland’s opening try – his ninth in Test rugby – and produced some lovely moments in attack, his offload playing in Keenan for a first-half try.

Robbie Henshaw - 7
Lead the team out on the occasion of his 50th cap and continued his current run of fine form. Always carried with intent and was his usual reliable self in defence.

James Lowe - 6
Used more for his kicking ability rather than his running game in the early stages, but grew into it with some nice flashes. Thought he had his first Six Nations try only to see it crossed out for a forward pass, and really tried to make something happen, making 102 metres in total, as Italy unravelled in the second half.

Jonathan Sexton - 8
Flawless from the tee in eight attempts, some of which were by no means straightforward. An assured 80 minute showing, attacking the line and throwing a number of sharp passes. Get that new contract signed. 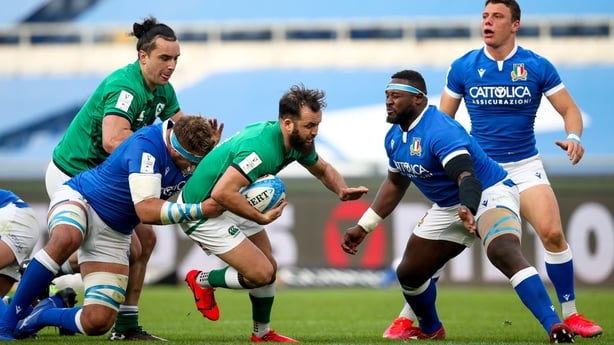 Jamison Gibson-Park - 7
Brought the usual tempo and while he was given an easy ride for much of the game, the scrum-half was notably keen to take risks and challenge the Italian defence while also mixing up his approach.

Dave Kilcoyne - 9
Doesn’t get many opportunities from the start but the Munster man really enjoyed himself in Rome. Nailed the basics, chipped in with some excellent tackles and showed real power in the scrum to give Andy Farrell some food for thought. Didn't return after being removed for a second-half HIA.

Ronan Kelleher - 6
Concession of penalty in opening minutes a poor beginning to his first Six Nations start but eased into the game, nailing early lineouts and contributing well in open play. However, inexperienced showed at times, including the odd wobble at the lineout. Needs to smooth those issues out.

Tadhg Furlong - 8
Pinged for early penalty but a really solid performance before appearing to pick up an injury in the second half. His threat as a ball-carrier is such an addition to the Ireland pack.

Iain Henderson - 7
The decision to cross out his early try was bizarre, but of little consequence in the end. Been playing some great rugby recently and kept that form going, including some really positive work around the lineout.

James Ryan - 7
Unlucky to end up on the wrong side of a couple of calls and was rarely troubled across a productive 80 minutes, ending the game as Ireland’s top tackler on 19, missing none.

Tadhg Beirne - 7
Redeployed in the back row after impressing in the second row against Wales and France. A nuisance around the lineout and got through a huge amount of work.

Will Connors - 8
Lots to like about his all-action performance. Superb chop tackle and turnover 20 minutes in was an early highlight, and was in the right place to score Ireland’s third try just before the break. Had the power to muscle over for his second when the hosts were down to 13.

CJ Stander - 8
Excellent turnover before half-time which allowed Ireland to go back down the pitch and score their third try of the afternoon. Showed good strength to score the bonus-point try just after half-time.

Rob Herring (for Kelleher 62) - 7
No issues at the lineout, played his part in one huge scrum effort and had a good involvement in Connors’ second try.

Cian Healy (for Kilcoyne 46) - 5
Looked a little off the pace and guilty of some sloppy errors.

Jack Conan (for Stander 62) - 7
Made his mark with some good lineout work and a great turnover.

Ryan Baird (for Henderson 62) - 7
A very encouraging Test debut. Put his athleticism to use and got a few strong carries under his belt. 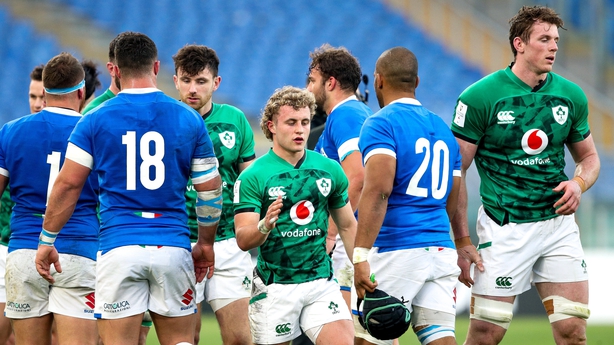 Craig Casey (for Gibson-Park 62) - 7
A tight call on the forward pass which saw Lowe’s try cancelled, but showed plenty of intent and some lovely touches on his Test debut, looking to move the ball quickly. A promising start to his international career.

Billy Burns (for Henshaw 70) - 6
Would surely have hoped for more time on the pitch with the game long beyond doubt. Little opportunity to make an impact.

Keith Earls (for Larmour HT) - 6
Poor error to kick out on the full from inside his own half but looked comfortable in the air and darted over for a late try.