Ireland head coach Andy Farrell said "conversations" are ongoing with Johnny Sexton regarding his international future after the outhalf hinted earlier this week he may not be part of the squad for the 2023 World Cup.

The Ireland captain, who starts against Italy in Rome this Saturday, will be 38 by the time the France tournament rolls around.

"If we talk about World Cup cycles, I might not be part of the full cycle but this group will definitely be better for this type of coaching and structures," Sexton said.

When Farrell was asked about the lie of the land with regards to discussions over the Leinster man's longer-term plans, he said: "There's no difficulty from my point of view and I'm sure there's not from Johnny's point of view as well.

"Conversations are going on in the background and both sides are happy with those conversations so it is what it is. Johnny has been his bright self during the week. He's been at the forefront of what's been a great week so far.

"As long as Johnny keeps on giving to Irish rugby, he'll keep putting his foot forward to be in the equation.

"He feels good at this moment in time, his appetite is as strong as ever, he's certainly one of those guys that makes the group feel right. As long as that appetite stays I'm sure we'll keep moving in the right direction regarding that." 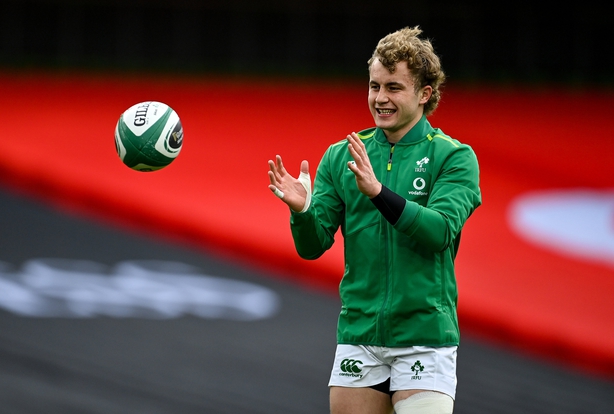 Farrell had words of praise for Munster scrumhalf Craig Casey who looks likely to make his Ireland debut off the bench on Saturday.

The 21-year-old was a replacement against France but didn't feature. He returned to his province to help them beat Edinburgh in the Pro14 and Farrell was happy to talk up his progress.

"Craig has been great," he said. "He's like a sponge. Hes at the front of the class with his notepad the whole time taking absolutely everything in. His attitude, like I've been saying the last couple of weeks, is infectious.

"I was very impressed with his mature attitude. Obviously he would have been upset for not getting any minutes in what he thought was going to be his debut against France, but then he goes back to Munster, dusts himself down and plays really well in Edinburgh.

"You can't promise anything in this world, certainly in international sport, but if he gets his chance he'll certainly be ready."

Ireland badly need win at in Stadio Olimpico having made their worst ever start to a Six Nations campaign.

Italy meanwhile are attempting to avoid a 30th Six Nations defeat on the bounce but Farrell stressed his charges will give them plenty of respect.

"We're always confident through the preparation that we have. Like any game that you come up against, certainly at international level, there's pressure for both sides.