Ireland must beat Italy to avoid an unlikely fourth championship defeat in a row but Andy Farrell says he is enjoying the pressure.

The Irish team lost to France in the final match of last year's Guinness Six Nations and are nought from two, Wales and Les Bleus again, in this campaign.

Italy have lost 29 Six Nations games on the spin but have shown glimpses of potential and the 41-18 defeat to England at the weekend didn’t tell the whole story of the game.

You have to go back to 1998 for the last time Ireland began a championship with two losses and while the Azzurri will prove no pushover, tougher tests are expected away to Scotland and at home to England in the final round.

"I’ve dealt with it all my life," said head coach Farrell, who captained Great Britain's rugby league team aged just 21, when asked how he was dealing with the pressure.

"You either embrace pressure or you get buried by it. I enjoy it. It makes you feel alive.

"You know when you’re taking the gig on… I believe that if you’ve not got pressure in your life, it’s not worth living.

"It goes with the territory, I suppose."

With nothing to play for in terms of silverware, Farrell is facing increasing calls to blood some young players for the upcoming fixtures.

Experienced half-backs Johnny Sexton and Conor Murray, who both missed out against France, are on course to be fit for the clash against Franco Smith's side.

"We’ll pick the strongest side that we need to to make that happen.

"You always take a big view, you always have that in the forefront of your mind but you certainly have to concentrate on the here and now.

"If you look at the context of what’s happening for us, you’ve got to look at the balance of our squad and the game time people have had, and what’s coming up with this fallow week, then another game, and another fallow week.

"Some of these guys might not have played for five or six weeks, so there’s all sorts of things that have to come into it.

"But first and foremost for me is doing what’s right for the squad." 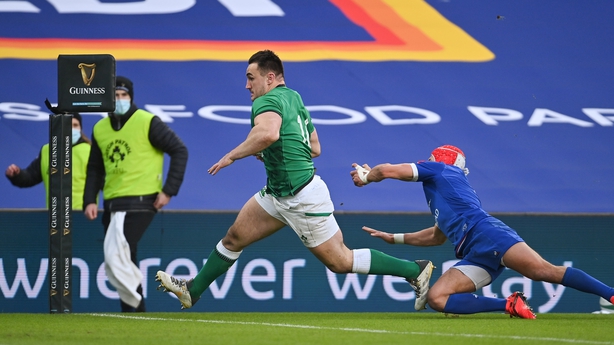 It’s a squad that has managed to dominate possession and territory on its last two outings while registering just two tries, one of which came as the result of a fortunate bounce.

Farrell dismissed a suggestion that players are not free to take their own on-field decisions.

The former Wigan player said: "I don’t know a coach that has ever said to [players], 'don’t take an opportunity’. It’s showing the pictures constantly of what they need to be able to do to execute that is key for us.

"It's a team issue and we all need to be on the same page regarding that."