Connacht kept alive their slim hopes of making the Pro14 final with a 30-20 away win over the Dragons at Rodney Parade.

Andy Friend's side are 10 points behind Conference B leaders Munster with only the top two from both conferences making the final.

Tries from Matt Healy, Abraham Papali'i, Caolin Blade and Tom Daly, along with 10 points from the boot of Jack Carty was enough to get the visitors over the line.

But they didn't have it all their own way with former Wales hooker Richard Hibbard scoring a remarkable hat-trick for the hosts.

The Dragons opened the scoring with a straightforward penalty from Davies before Connacht hit back with the opening try. A well-timed cross kick from Carty was gathered by Healy, who touched down for his 32nd try for Connacht. 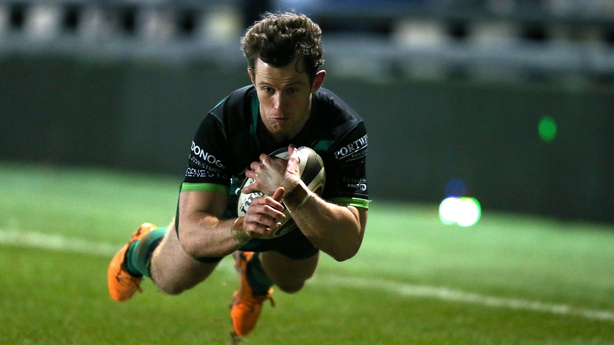 Connacht crossed for their second try soon after when Shane Delahunt broke off from an attacking lineout deep in the Dragons 22. The hooker offloaded to Papali'i who powered over the line from short range.

And they forced their way over the line courtesy of their powerful driving lineout with Hibbard claiming the try.

The pressure kept coming with experienced Wales and Lions centre Jamie Roberts a handful for the Connacht defence to deal with.

Such was the pressure the Dragons exerted on the Connacht line, Ireland international Finlay Bealham was sent to the sin bin for offside.

The Dragons made the most of their numerical advantage with Hibbard crashing over after another well-worked maul. Carty knocked over a penalty on the stroke of half-time to tie the scores at 13-13. 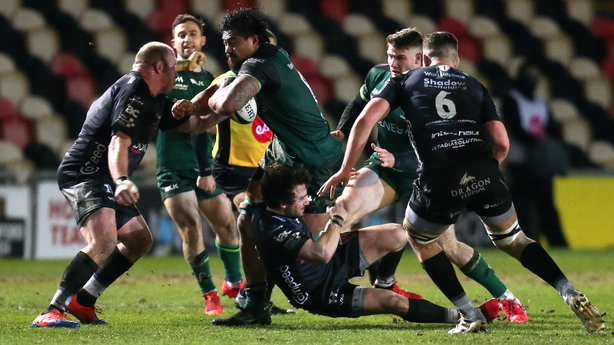 Connacht began the second half strongly by enjoying some possession in the Dragons half. Another lineout drive from the visitors pushed the Dragons backwards, with Delahunt yet again peeling away before a gorgeous offload sent Blade over for their third try.

But Connacht let their lead slip again and their inability to defend a driving maul was exposed for the third time which allowed Hibbard to complete his hat-trick. Davies converted to level the scores with 20 minutes to go.

The visitors claimed their bonus point try when Daly danced his way past two defenders to touch down with Carty converting.

And Carty pushed Connacht two scores ahead with an opportunistic drop goal to secure their fourth away win in a row.