Captain Charles Ollivon insists France do not consider themselves favourites for the Guinness Six Nations as he dismissed the suggestion as media hype.

Les Bleus laid down a marker by beating eventual champions England in the opening match of the 2020 tournament before finishing second on match points difference following a surprise loss to Scotland.

A youthful French team completed an impressive first year under head coach Fabien Galthie by claiming the runner-up spot in the inaugural Autumn Nations Cup, having been forced to field a much-changed line-up for the final against Eddie Jones' men.

According to the latest bookmaker odds, England are tipped to retain their crown, with France favourites to wrestle it away.

Toulon flanker Ollivon has stressed his side are currently only thinking about their opening match, which is away to perennial wooden spoon winners Italy on 6 February.

"No, not particularly, we don't feel like we are the favourites. It's all being played by the media," the 27-year-old said.

"It doesn't change our approach. We're gathered together in Nice to prepare the first match against Italy in Rome, that's what we are focusing on now.

"Each match will be difficult and complicated, we're aware of it, so that's the state of mind we're in right now."

England head coach Jones, whose side bounced back from their loss in Paris last February to grab both pieces of silverware on offer last year, talked up the dangers of France earlier in the day. 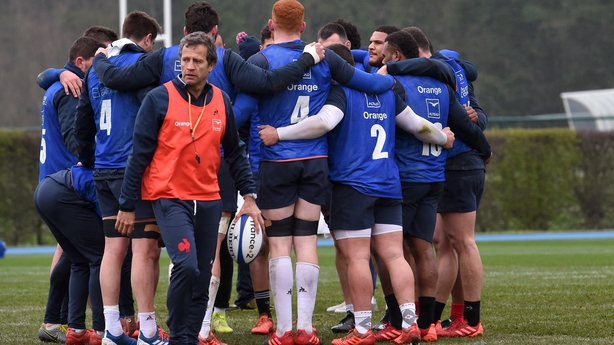 Les Bleus head coach Fabien Galthie insisted that pre-tournament comments will have little bearing on the outcome of the competition.

The 51-year-old is confident his relatively inexperienced team, who have a home World Cup on the horizon in 2023, are going in the right direction.

"We hope to do better than we did in 2020 by continuing to try to develop our rugby, our game, to grow the team," Galthie said.

"It's a team that is going to be one year older than the team of last year.

"There's no reason that this team does not continue to grow and to move towards the goals that we have set for ourselves."

Italy, meanwhile, have finished last in 15 of the 21 previous Six Nations campaigns, including each of the last five seasons.

Head coach Franco Smith's 32-man squad is short on experience, with only fly-half Tommaso Allan having won more than 50 caps.

South African Smith declared the forthcoming Championship a fresh start for the Italians as they seek to become a consistent force.

"It is clear to us that there is big expectation in the first game," Smith said.

"We want to win consistently, we want to be sustainable. We don't want to have one-off games - this is a new start for Italian rugby.

"We have got specific physical objectives we want to maintain and we have now got to get that consistency. The competition we are creating between players to get that jersey on the back is slowly growing."