In navigating what he says is a "tricky" schedule at the moment, Leinster coach Leo Cullen has named a strong side for Friday's Pro14 game against Conference A table-toppers Ulster at the RDS.

Following last weekend's defeat to Connacht, the hosts, albeit with two games in hand, will not want to lose more ground to Dan McFarland's outfit.

After undergoing a Head Injury Assessment following his withdrawal against Connacht, Johnny Sexton has been passed fit to play. Jordan Larmour and Seán Cronin have recovered from shoulder and thumb injuries respectively to take their place in a team that boasts many internationals. 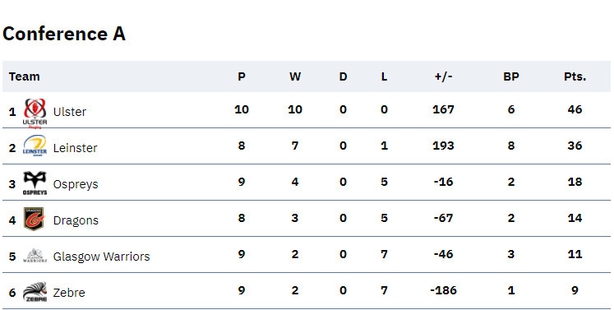 For Cullen, it's a case of getting the balance right at this time of the season in terms of selection.

Speaking to RTÉ Sport, he said: "This period is always tricky in relation to the Christmas games. We've had a game (against Munster) that has had to be postponed.

"There's a lot of chopping and changing in terms of personnel. Off the back of the international games we knew this was going to be a tricky period. A lot of guys coming back in fresh this week and the attitude has been good.

"A lot of guys have not played in a while. We have made wholesale changes, much more experienced players on view this week.

"The challenge is to build a cohesion in our performance for what are three huge weeks. Ulster are riding high at the top of the Conference and then we have two European games - Northampton away and then Montpellier at home.

"At the end of the block we have Scarlets, so our group dynamic will change again with internationals coming up. It's important then that certain guys got a rest. The break freshened them up for these block of games."

"Off the back of the international games we knew this was going to be a tricky period" https://t.co/m5SE3oBgI3 #rterugby

As for Friday's opposition, Cullen made the point that Ulster don't have to juggle as much when it comes a settled XV, when saying: "They have a lot more stability in their group because they probably don't lose as many players at certain stages of the year."

He added that McFarland's side, not surprisingly, are in a good place at the moment.

"The cohesion in their group is strong. They have a good group of coaches and are a very organised team. They are a very efficient in lot of things they do and they do a lot of things particularly well based on solid foundations around set-piece scrum, line and maul in particular. We know we have to be on our game.

"Ulster have a single focus now in that they are out of the Champions Cup, even though they still have the two games to play. They are unbeaten in the league this year and we are now the team chasing them. It's a change for us, but it's a good challenge all the same."