Ian Madigan helped himself to 22 points in Ulster's Guinness Pro14 derby win over Connacht as Dan McFarland's men recorded their first victory at the Sportsground in five years.

Despite having 17 players unavailable for selection, Ulster prevailed to make it nine straight wins and extend their lead at the top of Conference A.

Connacht notched tries through Jack Carty and John Porch during Kyle McCall’s sin-bin period, while three Madigan penalties had Ulster only 14-9 behind at the break.

The visitors seized control with tries from player-of-the-match Jordi Murphy and Nick Timoney, and despite Tom Daly touching down in response, Madigan steered Ulster home with penalties after 65, 74 and 78 minutes.

The Dubliner punished Daly for hands in the ruck after two minutes, and he rewarded Murphy’s breakdown work with a booming 10th-minute place-kick.

Trailing 6-0, Connacht were made to work hard for their opening points. Finlay Bealham was held up short before three successive scrum penalties led to Ulster loosehead McCall being binned.

Fed out wide in the 20th minute, Carty reached over in the right corner despite Timoney’s covering tackle. Carty added a fine conversion for good measure. 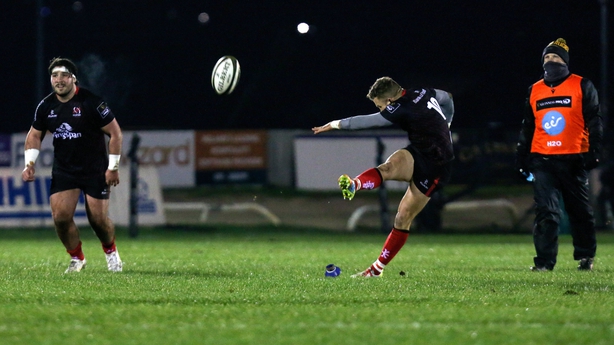 Connacht's lead was brief, though, as Ultan Dillane took out Kieran Treadwell at a lineout and Madigan stepped up to make it 9-7.

Another penalty provided the platform for the westerners’ second try in the 27th minute. Good hands from Tiernan O’Halloran and Daly put Porch over, with Carty converting again from far out.

However, a five-point advantage was a poor return for Connacht’s 80% share of first-half possession, and Ulster – with a strong wind behind them from the restart – were quick to make them pay.

With their forwards providing some penetration, Alby Mathewson wriggled out of a tackle from Carty and it was openside Murphy who burrowed over from the resulting ruck.

Crucially, Connacht began the final quarter with their third try, a strong burst from centre Daly seeing him break James Hume’s tackle before crossing the whitewash.

But 26-19 is as close as Connacht got, with Ulster winning the key breakdown decisions late on. Madigan finished with eight successful kicks from nine attempts, his final two efforts rewarding replacement Matthew Rea’s efforts over the ball.

Connacht are now 12 points behind Munster, who lead Conference B.