While Leinster touched down through Josh Murphy, Cian Healy, Dave Kearney and Jamison Gibson-Park for a second successive bonus-point victory, Cullen admitted it was a haphazard encounter for the most part.

Their plans were significantly disrupted by the pre-game withdrawals of Caelan Doris and Harry Byrne from the team, with call-ups from the bench for Murphy and Byrne’s older brother Ross.

Cullen explained: "We started the game OK, but it was a bit disjointed after that. Even though we’ve got a win and a bonus point, I think guys in the dressing room are sort of scratching their heads as to what actually went on there for the last couple of hours."

He also touched on an incident between Northampton flanker Tom Wood and his opposite number Josh Van Der Flier during the final quarter.

Wood appeared to catch the Ireland international in the head area when attempting to clear him out of a ruck, but referee Pierre Brousset deemed it to be an 'accidental collision’.

"I know there’s some level of contact with the head/face, but I haven’t slow-moed that down to look at it again," said the Leinster boss.

"It looks like he has some level of wrap at the end of all that. We’ll look at it after this and we’ll give it our view. It goes through the normal channels, like all the incidents in the game." 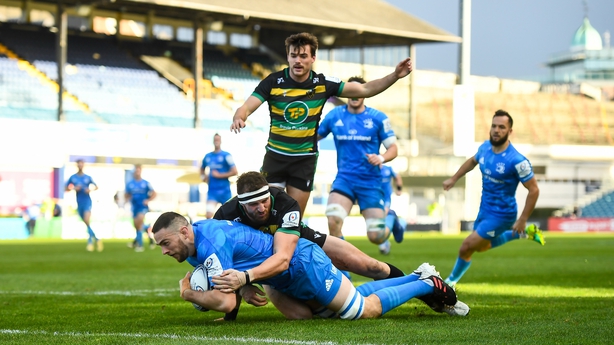 Northampton director of rugby Chris Boyd challenged his side to become more consistent.

Despite tries from Fraser Dingwall, Tom James and Nick Isiekwe in a battling performance, an understrength Saints side fell short of repeating their heroic away win over Leinster from seven years ago.

Boyd said: "We made some defensive lapses, but I think generally the intent was really good. It probably didn't show it on the TV and you certainly wouldn't have picked it up on the radio, but it was quite windy. It actually was quite difficult to play.

"We haven’t lacked intent all year. We’ve tried really hard. We’ve just been inaccurate for periods of time. Our challenge is to be more consistent for longer periods of time. We know we have the capability. We just drop off the concentration and it costs us."

Following their 13th straight defeat in all competitions, Northampton’s focus will now switch to the domestic front and a December 26 clash with Worcester at Franklin’s Gardens.

"We’ve got probably half a dozen guys to come back into the team for next week. Worcester at home on Boxing Day is a very important match for us from a league point of view," added Boyd.