Few opposition coaches come to the Sportsground with such a detailed knowledge of Connacht as Pat Lam, who returns to his old stomping ground on Sunday (kick-off 5.30pm) with happy memories of his time in the west of Ireland.

The title success in 2016 - the Pro12 as it was then - is still fondly remembered, but the 52-year-old is now looking to get an away victory for the Bristol Bears and keep their European dreams alive after a four-try bonus in their loss to Clermont Auvergne last time out.

Indeed there are a number of reunions that will take place in Galway. In his backroom team he has John Muldoon, the former Connacht captain and talisman, as well as Conor McPhillips, while players Niyi Adeolokun, Jake Heenan, and Peter McCabe strengthen that feeling of familiarity.

"As the draw unfolded, I can remember it clearly, 'here we go'," he told RTÉ Sport. 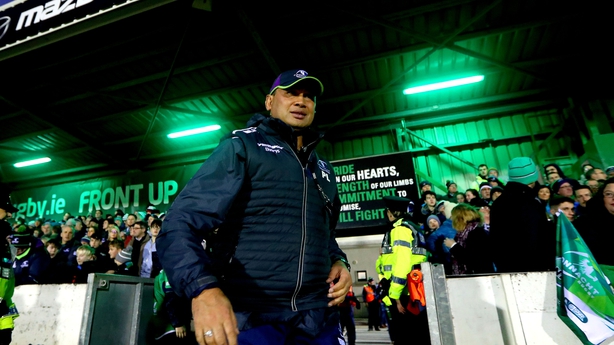 Connacht come into the contest on the back of a losing bonus point against Racing 92, and Lam is expecting a stern challenge.

"I understand the challenge we have going there. We have got to be well prepared because we know what’s coming," he told RTÉ Sport.

"We have to be at our best. You could have a great gameplan and things you want to do, but like we saw with Argentina beating the All Blacks for the first time, and Ireland against the All Blacks in Chicago, you have to get your mindset and physicality right.

Lam is a European winner from his playing days with Northampton and the narrow win over Munster in 2000.

He also claimed domestic silverware two years prior to that when the Saints were top dogs in the Premiership, but says there is something extra special about the Champions Cup.

"As soon as you win a European title, it's recognised everywhere. That's where I wanted Connacht to be, it’s where I want Bristol to be. It’s a big competition for us."