Connacht claimed a losing bonus point as they were defeated 26-22 by Racing 92 in their Heineken Champions Cup opener in Paris.

The hosts started strongly with tighthead prop Colombe powering his way over the line after five minutes following a powerful driving lineout with Iribaren converting.

Connacht enjoyed a period of pressure with Carty kicking their first points after Racing were penalised for not rolling away.

But the visitors struggled to cope with Racing’s firepower behind the scrum and the French giants were soon celebrating their second try.

Racing spread the ball wide to outside centre Virimi Vakatawa who bumped off an attempted tackle from Healy.

The France international raced clear into the Connacht 22 before offloading to Australian great Beale to touch down with Iribaren again adding the extras.

Connacht struggled to cope with Racing’s maul which put the French club on the front foot. 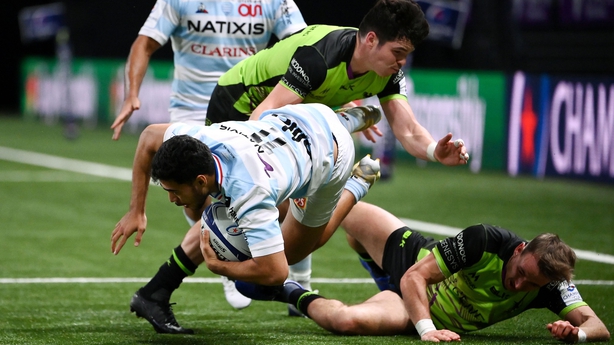 With numerous Connacht defenders sucked into the maul the ball was spun wide to Finn Russell whose long pass released Vakatawa who shipped the ball on to Taofifenua. The young wing claimed their third try with a sensational acrobatic finish at the far left-hand corner.

Connacht laid siege to the Racing try line in the final 15 minutes of the first half and came mightily close to crossing the whitewash when Ultan Dillane was put into space courtesy of a well-timed pop pass from Paul Boyle.

The second row galloped towards the line but was denied by a brave try-saving tackle by Iribaren which forced the Ireland international to spill the ball forward.

But Connacht were rewarded for their efforts on the stroke of half-time when Healy beat Teddy Thomas in the air to score after a tremendous cross-kick from Carty.

The outside-half missed the conversion, though, meaning Connacht turned around 19-8 behind.

Racing claimed their bonus point try with former All Black second row Bird touching down from short range after another powerful driving lineout from the hosts. Iribaren kicked the touchline conversion to push Racing into a 26-8 lead with half an hour to go.

Racing continued to apply pressure and looked like they were over again but Machenaud's pass was intercepted by Wootton who ran the length of the field to score with Carty converting.

Beale had a try disallowed after a pass from Thomas was deemed to be forward and Connacht ensured a grandstand finish when Oliver crashed over from short range, leaving the score at 26-22 with four minutes to go.