Leinster secured a bonus-point win away to Montpellier in their opening Heineken Champions Cup tie of the season.

Josh van der Flier, Ciarán Frawley, Dave Kearney all scored tries in the first half, while Dan Leavy and Jimmy O'Brien rounded off the victory against a poor Montpellier outfit.

Leo Cullen's side welcome Northampton to the RDS next weekend.

The comprehensive win will have served somewhat to erase the memory of the quarter-final defeat to Saracens at the end of last season and set them on the way for an assault on a fifth title. 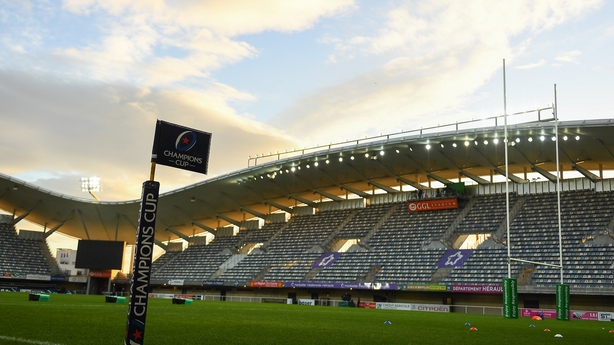 The Blues took their seven-match unbeaten record in the Guinness Pro14 into their latest European campaign and selected Irish stars Johnny Sexton and James Ryan on the bench.

Sexton pulled out of the game at the last minute and was replaced by Harry Byrne, younger brother of starting number 10 Ross.

The four-time champions had last tasted defeat in the quarter-final of last season's tournament against Saracens in Dublin and got off to the perfect start with a try after only five minutes at the GGL Stadium.

A strong scrum allowed Luke McGrath to break into the home 22 and quickly recycled ball provided space for it to be sent wide to the right where flanker Van der Flier popped up on the wing to cross in the corner. 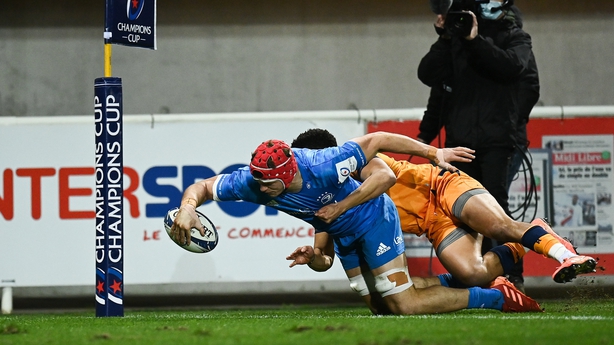 Ross Byrne was unable to add the extras, but he did hit the mark five minutes later after Van der Flier had turned over Jacques du Plessis on the Montpellier 22.

Leinster strong ball-carrying and aggressive defence knocked the hosts out of their usually fluent stride, but they did finally get off the mark in the 21st minute when Benoit Paillaugue kicked a penalty given against James Tracy.

Leinster immediately went back on the offensive and some strong close-quarter carries got them to within 10 metres.

They had penalty advantage but did not need it as skipper and man of the match Rhys Ruddock took a blindside pass, took out the final defender and sent Frawley in at the left corner. 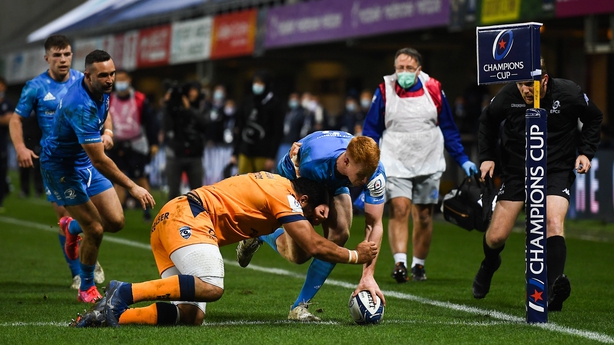 Once again Byrne was unable to convert and that allowed Paillaugue to cut the gap to one score when he knocked over his second penalty with 32 minutes gone after powerhouse French international lock Paul Willemse had made the first real dent in the visiting defence.

Leinster finished the first half with a flourish when left wing Kearney raced onto a superb cross-field kick by Byrne following a thrust by Van der Flier.

The ball bounced up into the arms of the wing and his try was then improved by Byrne to make it 20-6 at the break. 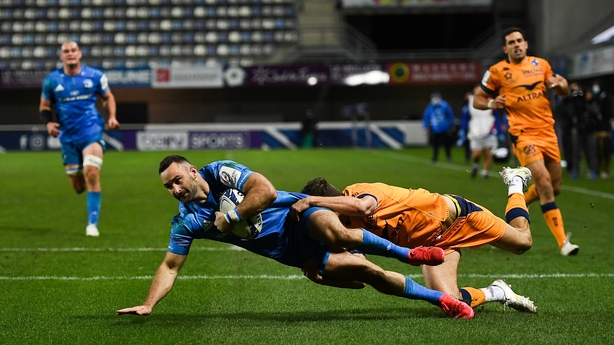 Paillaugue's third penalty of the night off the 10-metre line three minutes into the second half gave the home side something to build on and it was a much more even contest in the second half.

Cullen brought on four Irish front five starters early in the third quarter and they got back into the game to score two more tries.

The bonus-point came from flanker Leavy in his first European outing since being injured in the quarter-final in 2019 and then O'Brien raced 25 metres in the last move of the match to round things off.

Harry Byrne, who replaced his elder brother, added the final conversion to an earlier penalty.