We saw a real change in Ireland last Saturday, beating Scotland 31-16 and possibly glimpses of what the players believe they are building.

Something seemed to click after the 30-minute mark. There was a hugely definitive moment when Ireland decided to put the ball through the gap between the forwards who were lining up off Conor Murray. Murray found Johnny Sexton in a wider position instead of using the forwards to bash their way to faster ball. Sexton had Hugo Keenan off his shoulder, who got his shoulders free at the other side of the tackle and offloaded to Keith Earls. Fast forward another few phases and Ireland were teeing the ball up to claw back three points to make it 9-6 in favour of the Scots, but Duncan Taylor had been sent to the sin bin for the remainder of the first half and Ireland had swung the momentum back in their favour.

Ireland started with a lot of control but missed the target with a penalty which failed to see them capitalise on a dominant period and within a few minutes of play, Scotland had gone 6-0 up. Irish rugby under Andy Farrell was at a crossroads. It was time to take back control or risk a public onslaught and a shattering of their own confidence. Despite the messages being portrayed by players in their interviews, it would have been a hard one to come back from had they lost.

There were a number of obvious factors, including the turning point of Ireland’s attacking intent. Before this, Ireland used Murray’s boot to put Scotland under pressure high up the pitch, which actually worked out because Ireland gathered the ball back before frustratingly coughing it up cheaply. You couldn’t say the attacking strategy wasn’t working because they regathered the ball further up the pitch, but it wasn’t stretching Scotland, and Ireland were still giving the ball back to the opposition with no sign of the ruthless execution that we’ve been waiting for.

Between the wide-wide plays that Ireland began to implement and the Sexton kick on penalty advantage resulting in Earls' first try, Ireland regathered some of their scoring ability. 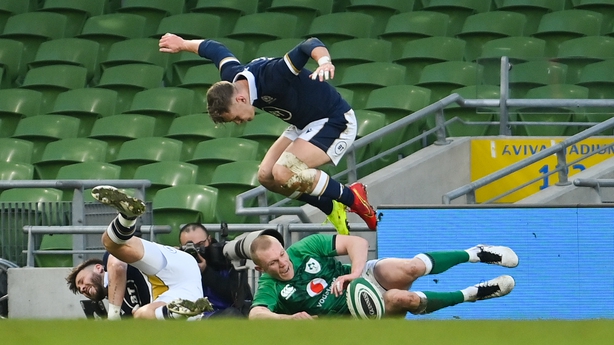 All of a sudden Scotland were the team on the back foot, guessing where the next attack would be and Ireland were that bit less predictable. Attacking wider might not get you the rewards in that particular phase, but if you get good return on that attacking strategy it will make the resulting phases a lot easier, it also makes the carries easier for the forwards which became more notable. It put Ireland in a more physically dominant position. Breakdowns are easier to clear when you’re on the front foot. It’s easier to hit a soft shoulder in attack because more of them exist with quicker ball and a retreating or disjointed defence.

When have you seen Stuart Hogg mess up two plays in a row? At the surface they look like pretty basic errors from the Scottish captain, but how much ground did he have to cover before that? Ireland were stretching the defence which has a knock on effect to the Scottish backfield and these mistakes happen a bit more freely when you’ve been over and back across the backfield.

We’ve learned a lot about the more experienced generation of players. They’re crucial in terms of guiding this Irish team towards the next World Cup and they give the game more direction. With a change of management and style, I think the public need to be a bit more patient with blooding new talent. It’s not that the younger players shouldn’t play, but it takes time to get up to speed. The French might be the exception to that rule, but it hasn’t always worked out for them. 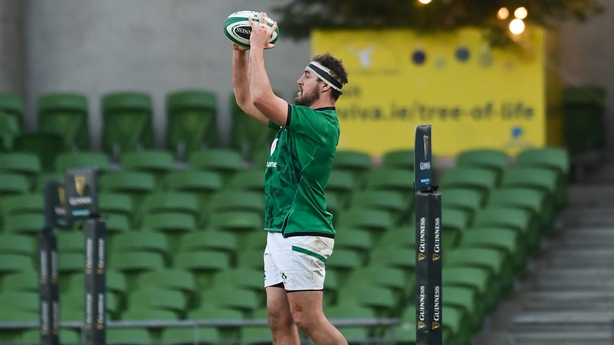 Rob Herring made a big difference to the set-piece, Peter O’Mahony was unlucky not to be awarded the player of the match and Keith Earls was back on the scoreboard to become Ireland’s second highest tryscorer. Sexton wasn’t at the top of his game but he was involved in defining moments in the game. Murray was back to some of his best rugby too, his increasing confidence evident from a quick tap when Ireland were awarded a penalty in the final quarter of the game. While there’s been a lot of experience and caps gained for younger players, the older guys stood up and made a difference.

Caelan Doris was excellent yet again, repeatedly getting through the defensive line to allow Ireland to go forward. Keenan now seems like an established Ireland international and Robbie Henshaw had a positive impact on the Irish performance. There’s a lot to take from the win and that goes for our perception of the management too.

In saying that, one swallow doesn’t make a summer. Scotland were up for it until Ireland really put the foot on their throats. After that they were looking for a handout from the referee for an eye gouge and their debutant out-half went missing. They missed the direction of Finn Russell and Adam Hastings and bar a poor mistake from Herring, they never fought their way back into the game after the initial dominance for 20 minutes.

Ireland have been given the breathing space they needed to develop their game further under the new style. The Six Nations is only nine weeks away, which will afford them a few camps before hopefully continuing this momentum.

The players will dust themselves down for a big European week next weekend. The provinces have held the fort superbly without their internationals and it’s been a real credit to the Irish system, but it’s been too easy up to now. The small tournaments are over, it’s back to serious business in the Heineken Cup and the Six Nations at the start of 2021. The transition period is over but the development will continue.

Last Saturday has put an end to 2020 as far as international rugby is concerned and hopefully everything will look a lot brighter by the time 2021 rolls around.