Mention of Georgia still gives a lot of rugby fans of a certain age the shivers.

Back in 2007 Ireland, under Eddie O'Sullivan, squeaked past Georgia in the pool stages of the World Cup in Bordeaux, 14-10 the final score.

It wasn’t pretty and Ireland crashed out of the tournament after subsequent losses to France and Argentina.

The good news, we think, is that Ireland won’t have any such problems, even with nine changes to the team that lost 18-7 to England last weekend, in this afternoon’s Autumn Nations Cup clash against the Lelos.

Currently ranked 12th in the world, Georgia, under coach Levan Maisashvili, have lost their three games in this window, with their only try coming in the 48-7 friendly defeat to Scotland at the end of last month.

For what it's worth (nothing?), before this weekend they co-led the dominant tackles stats in the competition along with England on 26 – flanker Beka Saginadze the man to watch out for there.

Former Ulster coach Neil Doak, who had a stint in the Ireland backroom team and David Humphreys, formerly of Ulster, Ireland and Gloucester, where he served as director of rugby for six years, have been recruited into the Georgia set-up on a short-terms basis.

Italy’s woes in the Six Nations, where they haven’t won a game in six years, often throws up suggestions that Georgia might get an invitation to the tournament, but Doak reckons they need more consistent competition in order to get close to that level.

"It's encouraging in such a short space of time, but playing against the likes of Ireland, [Georgia are] nowhere near where they need to be and that's just a lack of quality competition on a regular basis," Doak said in the Irish Independent.

"It's been really good. Over the period of time, the players have got better.

"The cohesion has definitely improved. Levan Maisashvili, the head coach, asked me to tinker with some of the attacking stuff and introduce a few things; they took it up pretty well but I don't think they had a good understanding of it.

"I don't think the scrum and set-piece has gone as well as the players would like. They're better than what they've shown.

"It's just a lack of rugby, some of the players haven't played since the last World Cup. It's quite difficult."

The exposure to some of Europe’s top sides will dampen any expectations around any change to the format of the Six Nations for a while yet.

Most of the build-up to today’s game, from an Ireland point of view, has focused on what went wrong last Saturday in Twickenham, scene of the latest loss to Eddie Jones' England.

A poorly thought-out Plan A and a reluctance or inability to switch to some sort of back-up plan seems to be the general consensus among a host of former internationals.

The thing about today’s match, which will be Ireland’s fifth time to take on Georgia, is that it won’t reveal anything about the essence of the team and where they are at one year after Andy Farrell took over.

"When you lose, the learnings are so important," scrum coach John Fogarty said.

"How we've gone about our week in helping the lads to understand and us to growing as a group has been really good.

"You'd hope to see some of the learnings.

"Certainly around our set-piece, we want to make sure that we put out a good performance.

It’s a new-look side with just six players who would likely start a Six Nations game and they will still have way too much for Georgia, who traditionally bring a strong forward game, little of which has been evident recently. 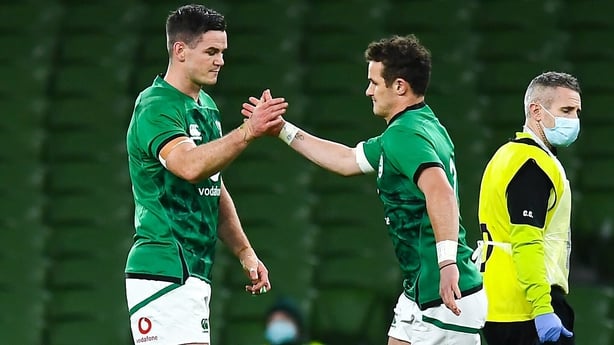 It’s more game-time for Billy Burns, who will want to secure the back-up spot to Johnny Sexton for the springtime.

"He can take people on, he’s got a turn of speed and a bit of explosiveness about him as well," said Farrell of his out-half.

"Hopefully he can bring a bit of that as well as some guidance of being able to marshal the team around the field, because at 10 that’s an obvious one he’ll get judged on."

Ulster club-mate Stuart McCloskey gets another chance to impress in the ultra-competitive centre position, while Munster’s Shane Daly is likely to debut off the bench.

"Ireland at the moment remind me of a team that are stressed every time they go into contact, they’re stressed when they get into key areas of the field," Donal Lenihan told the RTÉ Rugby podcast this week.

The team really need to clean up this area today and not make hard work of subduing a tier two nation.

How they fare against an improving Scotland, who finished second in Group B, next week will provide a more accurate assessment of whether or not the team is on the right path.

Follow Ireland v Georgia via our live blog on RTÉ.ie/sport and the RTÉ News app, watch live on RTÉ One from 1.40pm, or listen to live updates on RTÉ Radio 1's Sunday Sport.