Dan Leavy's reintegration into the Leinster team continues apace with the Ireland back row named to start for the second week in succession as the province prepare to take on Cardiff Blues in the Guinness Pro14 on Sunday.

Leavy made his first Leinster start since suffering a serious knee injury in March 2019 on Monday, scoring a try against Edinburgh in the process. That performance had followed substitute appearances in preceding weeks.

Leinster head coach Leo Cullen has included him in the back row for the fixture against Cardiff alongside Rhys Ruddock, who will captain the side, and Josh Murphy.

The fit-again Ryan Baird, who came on as a substitute against Edinburgh as he recovers from an adductor issue, forms the second row partnership with Ross Moloney, while Peter Dooley, James Tracy and Michael Bent staff the front row.

The back three is made up of Jimmy O'Brien, Cian Kelleher and Dave Kearney, while Ciarán Frawley and Liam Turner, who is among four Academy players in the team, start at centre.

Luke McGrath and Harry Byrne are the half backs.

Ulster have made six changes for their clash with Scarlets at Kingspan Stadium on Sunday evening.

The side were in action in Italy on Monday as they ran in nine tries in a commanding victory over Zebre, and they have made a number of changes as they attempt to keep pace with Leinster at the top of the Conference A table.

In the back three, Rob Lyttle comes in on the left wing, joining Matt Faddes on the right wing and Michael Lowry at full-back. Stewart Moore is named in midfield alongside Luke Marshall. Bill Johnston retains his starting berth at fly-half, and John Cooney comes in at scrum-half.

The starting front row of Eric O'Sullivan, John Andrew and Marty Moore is retained. Alan O’Connor will lead out the Ulster men and is paired with Kieran Treadwell in the second row. Matty Rea will start at openside, Sean Reidy comes in at blindside, and Marcell Coetzee completes the pack at number eight.

Tom O’Toole has returned from injury and is named among the forward replacements with Adam McBurney, Kyle McCall, David O’Connor and Jordi Murphy. Alby Mathewson, Ian Madigan and Craig Gilroy are the back line reinforcements.

Andy Friend has made half a dozen changes as Connacht attempt to respond to their round six loss to Scarlets with victory over Zebre in Parma on Sunday afternoon.

Irish international Ultan Dillane could make his 100th appearance for the visitors after he was named in the matchday 23. Dillane made his Connacht debut in December 2014 and was a starter in the Guinness Pro12 final 18 months later.

Meanwhile Sean O'Brien has ended a long injury absence to be handed his first starting jersey in nearly two years. The Galway native last started for Connacht in the 2018 Christmas interpro against Ulster, with his only appearance last season coming off the bench against Leinster in November before suffering serious shoulder and foot injuries.

O’Brien lines out in a new look back row with Sean Masterson at openside flanker and Jarrad Butler captaining the side from number 8.

Sean’s brother Eoghan is drafted into the second row alongside Gavin Thornbury, while there is a change of both props with Denis Buckley and Jack Aungier starting alongside hooker Shane Delahunt.

In the backs, Colm Reilly and Jack Carty continue their half-back partnership, while Tom Farrell comes into the centre alongside Tom Daly with Sammy Arnold moving to the wing. Alex Wootton and John Porch complete the side. 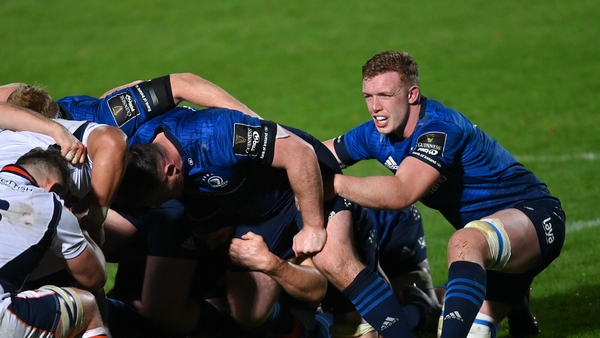 Patience paying off for Dan Leavy and Leinster