Ireland host Wales this evening in the Aviva Stadium in the first match of the newly minted Autumn Nations Cup.

In lieu of the cancelled November internationals against Australia, South Africa and Japan, organisers have set up this mini tournament to fill the void.

With options limited, this means a fifth meeting between Ireland and Wales in just 20 months with the lack of fans detracting from a fixture that may becoming a little overworn at this point.

There may be a trophy for the overall winners but it’s a friendly in all but name, however, that gives Ireland boss Andy Farrell a chance to mix up his team selection.

Had Covid-19 not interrupted the calendar, the head coach would have had some scope for experimentation during two Tests against Australia.

That means he is comfortable in making seven changes to the side beaten by France two weeks ago.

All You Need to Know:  Ireland v Wales

"It's a good side. It's one I am excited about, that's for sure," said Farrell, who has called in Chris Farrell and Jamison Gibson-Park to his backline, while Ronan Kelleher, Iain Henderson, Peter O’Mahony and Josh van der Flier return to the pack.

"Some people have waited for a chance to show what they are about and others have got another chance, so it's a good blend.

"I think it's one that can put in a performance also."

But all eyes will be on James Lowe to see how he deals with his first taste of international action. He was on the brink of a New Zealand cap in 2015 before injury intervened.

Fast forward five years, with the last three spent enthralling Leinster fans at the RDS and Lowe, 28, who previously described the residency rule as "stupid", is about to become an international for his adopted country.

He checks in at 6’2" and just over 16st but it’s his dynamic and aggressive style that sets him apart.

"I think he brings an extra dimension to how we want to play," said Farrell of the former New Zealand Maori cap, who has scored 33 tries for Leinster since his arrival.

While most of the other selections were not unexpected, the inclusion of Gibson-Park, another New Zealander, from the start is interesting.

Conor Murray has been comfortably Ireland’s best scrum-half for the past decade but, for some reason, has been unable to reach the heights of 2017/2018 when he starred for the Lions and helped Ireland to a Grand Slam.

Various injuries have meant others like Kieran Marmion or Luke McGrath have had look-ins so the selection of the Leinster scrum-half, with Murray on the bench should at least allow Farrell to see another picture.

The Munster and Lions number 9 is far from finished but a little heat will do no harm.

"His speed of ball is great, his skillset across the board with his hands and his kicking, his vision and his decision-making is pretty good," was Farrell’s appraisal of the former Blues and Hurricanes man.

"He's a calming influence as well, even though he's playing quickly he's able to see many pictures and make good decisions along the way."

Wales, whose last win in Dublin came in a World Cup warm-up game in 2015 and who are on a five-match losing streak that began in the Aviva last February, have opted to make just one change to the side that lost to Scotland.

Justin Tipuric, who only missed that game due to a bout of tonsilitis, returns at number 7.

Ireland have not lost back-to-back Tests since their tour to South Africa in 2016 and have beaten Wales in their last three encounters but, for a proud rugby nation, those kind of stats are more likely to inspire the visitors. 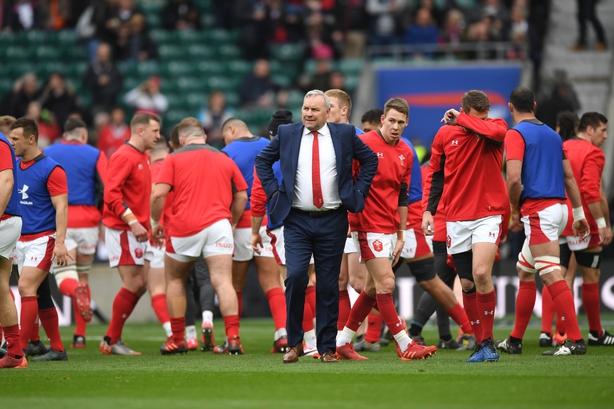 Wayne Pivac’s side, who were Grand Slam champions in 2019 under Warren Gatland, will aim to channel that hurt into a spirit-lifting win.

Alongside those five defeats in a row, they’ve also had to deal with the departure of defence coach Byron Hayward five days ago, in one of those mutual agreement disagreements.

"I’m certainly not seeing it and if it is [there] then the players are very good at hiding it," replied the New Zealander when asked about unrest in the camp by Wales Online.

"When these sorts of things that you mention [defeats and coaches losing their job] happen, you’d expect a response and we’ve certainly seen that in training."

There was a period when Ireland and Wales would regularly swap away wins in the championship and playing away from home seemed to suit.

"Facing the Irish teams I have in the past, particularly with crowds, it (Dublin) is always a difficult but enjoyable place to come and play," said captain Alun Wyn Jones, who will win his 150th cap.

This Welsh team need to respond. A made-up fixture against a changed-up Ireland team in an empty stadium might just be the place to put and end to their losing streak.

Follow Ireland v Wales on Friday (kick-off 7pm) via the liveblog on RTÉ.ie/Sport and the RTÉ News App, live coverage on RTÉ2 and RTÉ Player or listen to live match commentary on RTÉ Radio 1.