Johnny Sexton expects Jacob Stockdale to put a difficult night in Paris behind him when Ireland welcome Wales to the Aviva Stadium on Friday for their opening Autumn Nations Cup clash.

Stockdale cut a frustrated figure after an error-riddled Irish display saw the French run out 35-27 winners and ruin the visitors' hopes of snatching the Guinness Six Nations title.

Operating at full-back, the 24-year-old has certainly had better games, but his captain has backed him to offer a swift reminder of how good he can be in the position when the Welsh come to town.

"Last week was tough for a lot of guys, for everyone really," said Sexton.

"He's a great guy Jacob. He knows that some of the mistakes he made on the day... there was one time he made a great line break and the ball just slipped out of his hand. It was a bar of soap.

"There was another one where it was fired at this feet and he knocked on. He'll get them the next day. We just need him to keep being himself because you saw what he can do against Italy, you've seen what he can do, especially at full-back, over the season with Ulster.

"He's kept his confidence I think. We're looking forward to seeing his best on Friday night." 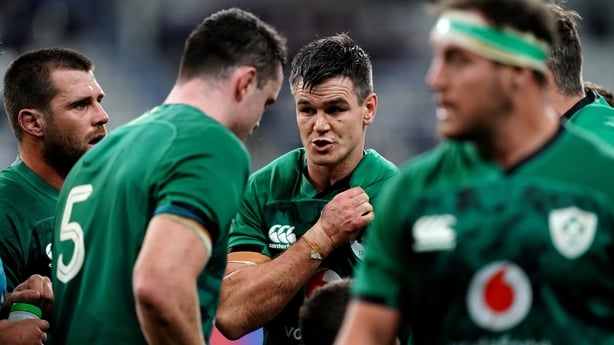 Sexton struggled to contain his own emotions at Stade de France when he was replaced by Ross Byrne in the 69th minute with Ireland trailing 28-20.

The Leinster out-half shook his head in disbelief at the call, though he has since apologised to head coach Andy Farrell for his reaction and reiterated today that he's keen to put it to bed.

"When you make a mistake you've got to accept the consequences," he said.

"I've had good chats with the management. If you make a mistake, you've got to bear the brunt of it.  If I've been getting criticism, well that's what's happened. I've got to move on. I've got to be better, and I'll try and be better in the future.

"Ultimately we're never going to be able to make up for (the France game). That's the hard thing about sport.

"It's two teams that'll be hurting a little but - or hurting a lot probably - and it will be a really tough game."

Wales aren't exactly travelling to Dublin in flying form themselves. They lost their final Six Nations match against Scotland - their fifth defeat on the bounce - and finished only above the Italians in the table.

"We know them so well," Sexton said of Friday's opponents.

"It's about improving our consistency over the next four games, making sure our performance level improves from France and then stays at a high level week on week.

"That's where the challenge has been through the week, drawing a line under the Six Nations. The new coaching team was assembled at the start of the year, we've had a Six Nations together and we finished third. We have lots of areas where we need to improve but also we took some positives.

"We're not that far away. We created a lot of chances in the last game especially. We just need to start capitalising on them.  But realistically, we finished third, that's the bottom line. We've got to improve. That's what we've be trying to do all week."