Relentless Leinster maintained their perfect start to the Guinness PRO14 season as they pounded Glasgow 32-19 to claim a fourth straight bonus-point win.

Leo Cullen's champions had run in 18 tries in their first three games of the season and continued that free-scoring start as Tommy O’Brien, Luke McGrath, Scott Penny and Michael Bent crossed over at Scotstoun.

George Horne, D’Arcy Rae and Thomas Gordon offered some resistance as they grabbed three tries for Glasgow but Danny Wilson’s Warriors have now lost three of their four opening fixtures. 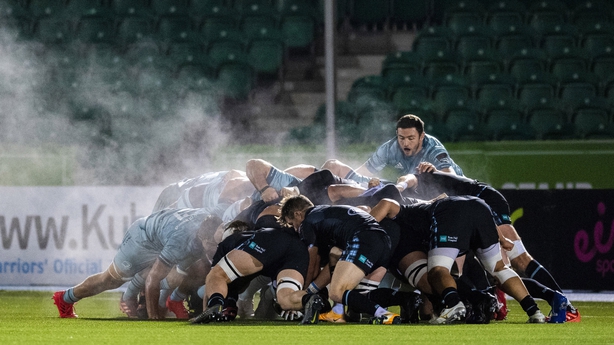 Both sides were without a raft of international stars but initially it looked as though it was Glasgow who were coping best without their big hitters.

Wilson's men mounted a couple of early charges but could not maintain the ferocity of their attacks as they inched into the Leinster 22 and were soon stripped of possession.

And it was with devastating speed that the Dublin powerhouse smashed up field to take the lead 11 minutes in, with Harry Byrne spotting a huge space as he set O’Brien away, with the centre fending off Huw Jones to score.

The Warriors knew they would have to take risks even at that early stage.

Niko Matawalu and Tommy Seymour rolled the dice with a couple of daring offloads before Hamish Bain and Ryan Wilson added some brute strength to their flair play, leaving another big gap for George Horne to canter through to level the scores 17 minutes in.

But it was not long before the Scots were dumped on the back foot again by the visitors’ bone-crushing physicality at the breakdown.

Byrne nudged Leinster back in front with a penalty and while Josh Murphy and Rhys Ruddock were twice held up on the line, those brave Glasgow efforts were only delaying the inevitable.

Scrum-half McGrath caught the hosts cold as he took a quick tap and go before stretching over for the try in the 28th minute.

Leinster grabbed a third three minutes before the break as the Glasgow line-out defence crumbled, allowing Penny to roll round the side for the touchdown.

Glasgow knew the next try would be vital and they made sure it went their way three minutes after the restart as breaks from Matawalu and George Horne forced Leinster into reverse before Rae crashed over, with Pete Horne’s conversion cutting Leinster’s lead back to eight points.

But there is a reason Cullen’s team have gone over 500 days since their last league defeat and they proved why once more as they clinched their bonus point – and their 23rd consecutive PRO14 victory – in the 54th minute.

Jones was sin-binned after resorting to illegal means to halt Rory O’Loughlin’s blistering run to the line and Warriors’ 14 men could not prevent Bent from shunting over for the fourth.

Jones copped a high tackle on his return as Cian Kelleher took his turn in the bin. Gordon then squeezed over to give Glasgow some faint hope in the final six minutes but it was too little, too late as Byrne wrapped up the win with a late penalty.