Leinster, Munster, Ulster and Connacht have all learned their pool rivals in the revamped and expanded Heineken Champions Cup after the draw was made in in Lausanne on Wednesday afternoon.

Leinster - who were beaten by Saracens in the quarter-finals in last season's competition - will face Montpellier and Northampton Saints in Pool A, while in Pool B Connacht can look forward to a clash with their old coach Pat Lam when Bristol Bears come to the Sportsground. The Westerners are also up against Racing 92, beaten in the final by Exeter Chiefs earlier this month.

Also in Pool B, Munster will square up to Clermont and Harlequins, while Ulster have been pitted against Gloucester and Toulouse.

The tournament has been extended to 24 teams for the 20/21 edition to compensate for the huge disruption caused to the European domestic calendar after the outbreak of the Covid-19 pandemic.

Eight teams each from the Pro14, France's Top 14 and England's Premiership have been divided into four tiers across two pools, with each side playing four group games, as opposed to six in a normal season.

The top four from each of the 12-team pools progress to the knockout stages, with the clubs ranked from number five to eight in each pool dropping into the last 16 of the Challenge Cup.

The revamped format includes home and away quarter-finals with the aggregate score over the two ties deciding the winner. 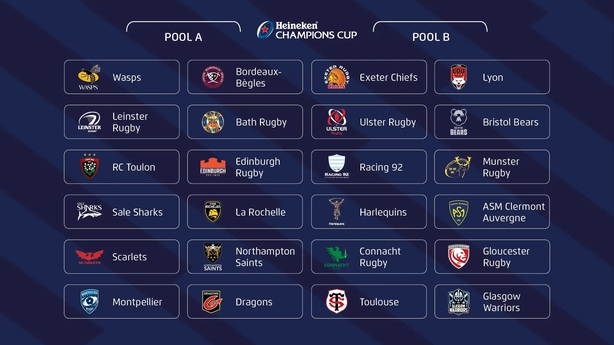 Last season's competition was made up of 20 teams with the Pro14 providing seven of that number.

The games will be played over the course of December and January with fixture details to be announced at a later date.

This year's final will be played at Stade Velodrome in Marseille on 22 May.

POOL A (with opponents in brackets)

POOL B (with opponents in brackets)