While there is no Irish province in this year's Heineken Champions Cup final the home interest lies with three men on the cusp of making Racing 92's European dreams come true.

Munster and Ireland exiles Donnacha Ryan and Simon Zebo are in the running to face Exeter in the final on Saturday in Bristol, while behind the scenes Mike Prendergast is the attack and backs coach.

Lock forward Ryan, who has 47 Ireland caps, moved to Paris in 2017, while full-back Zebo (35 caps) decided to spread his wings to seek a new challenge the year after.

Now both men find themselves 80 minutes away from the top prize in European rugby.

Asked what they bring to Racing 92, Prendergast, himself a former Munster scrum-half, said: "One is a calmness, from Donnacha, and the other is positivity, from Donnacha as well but Simon is an incredible positive guy.

"He's an incredibly positive guy, anyone that knows him can see. 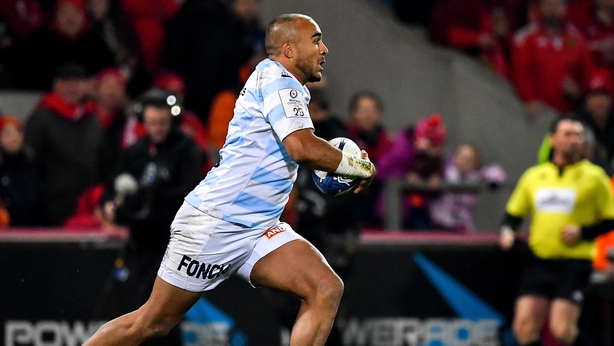 "He plays with a smile on his face. And there is that good kind of atmosphere and ambience as we call it here.

"He's been out injured for a while...his first game back was the quarter-final of the Champions Cup and, for a guy who hadn’t played for seven or eight months, had a very good game, same in the semi-final against Saracens.

"There is that those positive vibes and he adds that massively and then Donnacha just brings a calmness and experienced head.

"His rugby intellect, his rugby IQ is right up there, you know, and it's something that is massively appreciated here in terms of the staff ourselves.

"The rugby knowledge that he is passing on to players. He is growing our lineout callers."

You can hear the full interview with Mike Prendergast on the RTÉ Rugby podcast here.