Connacht wing Alex Wootton is an example to others who suffer setbacks and come back stronger, says Donal Lenihan.

The 26-year-old former Ireland 7s international is on loan with the Westerners from Munster and has been in superb form since professional rugby returned in the middle of August, helping his new side to wins over Ulster and Glasgow in that time.

Lenihan, speaking on the RTÉ Rugby podcast, recalled how Wootton suffered a low as Munster lost out to Racing 92 in the 2018 Heineken Champions Cup semi-final, where he was singled out for blame for the 27-22 defeat, which was not as close as the scoreline suggests.

"I always rated him when he played for Munster. He had a great capacity to beat the first defender and play," said the former Ireland lock forward.

"He had a bad experience in the semi-final against Racing, Teddy Thomas got two tries.

"He got lacerated after that and his confidence dipped and he never really got another chance.

"It's difficult because [Andrew] Conway and [Keith] Earls are there. There's no question they are a step above him but I am delighted to see a guy like that [bounce back].

"He’s only gone on loan so obviously Munster see something in him still.

"But he’s been handed a second chance and in the games he’s played since he returned from lockdown he’s been really impressive. There's a lesson there for all players.

"I’m delighted to see he’s doing well because he has something to offer." 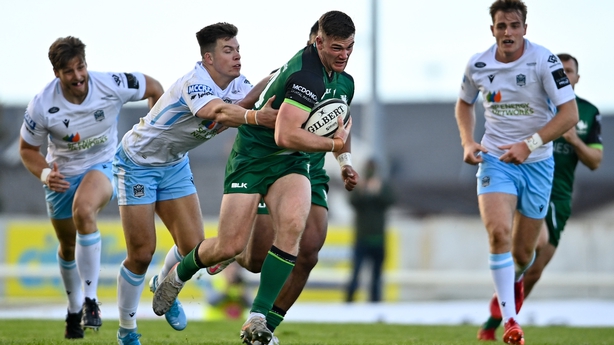 Lenihan added that Andy Friend’s side are particularly adept at spotting potential within players who haven’t broken through elsewhere.

Citing former Leinster Academy and Ireland U20s wing Peter Sullivan, who made his debut against Ulster at the Aviva, Lenihan said: "I saw him play for Lansdowne on a number of occasions. He impressed every time.

"Connacht have been better than most in terms of identifying [that type of] talent.

"They have been brilliant at identifying guys who are a step above others in the All-Ireland League and given them their opportunity, so well done to them."