Connacht head coach Andy Friend has named a strong squad for tomorrow's Guinness Pro14 season opener against Glasgow Warriors, with Jarrad Butler leading out the side from blindside flanker.

Butler begins his third season as Connacht captain having joined in 2017, and he starts in the number 6 position with Conor Oliver earning a start at openside after an impressive pre-season campaign. Paul Boyle completes the back row at number 8.

Friend has named the same backline that put in a brilliant attacking display against Ulster at the Aviva Stadium, with Irish international trio Kieran Marmion, Jack Carty and Bundee Aki forming the 9-10-12 axis.

Tom Farrell partners Aki in the centre, while John Porch continues at full-back with Alex Wootton and Peter Sullivan on the wings.

"It's always vital you pick up home wins in this competition and Saturday will be no different," Friend said.

"We're coming up against a very strong Glasgow outfit and our recent record against them isn’t great, but our aim in these opening two weeks is two victories and I firmly believe we can achieve that and start the season on a high". 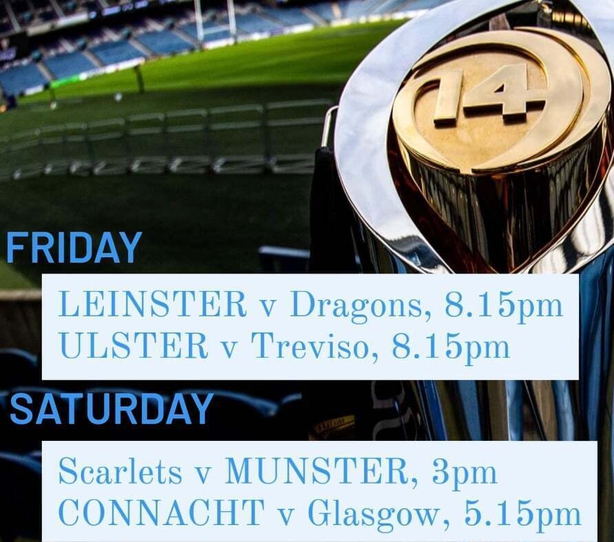 Meanwhile, full-back Mike Haley and Darren Sweetnam make their first Pro14 appearances for Munster since February with Andrew Conway starting on the right wing for their clash away to Scarlets tomorrow.

Damian de Allende and Chris Farrell form the centre partnership with Craig Casey and JJ Hanrahan in the half-backs.

James Cronin, Rhys Marshall and John Ryan pack down in the front row with Jean Kleyn and Tadhg Beirne, who faces his former side for the first time, in the second row.

Academy out-half Ben Healy is among the replacements.