Leinster's season ended in defeat as a second-half comeback fell short in a 25-17 loss to Saracens in their Champions Cup quarter-final at the Aviva Stadium.

Leo Cullen's Pro14 winners were looking to maintain their unbeaten campaign and avenge last year's European Cup defeat at the hands of the same opposition, but they found themselves 19 points in arrears at the interval and the game appeared to be over as a competitive fixture.

The hosts did rally, with Andrew Porter and Jordan Larmour crossing in a spirited second half, but it was the holders who finished stronger, spurring two penalty opportunities before Alex Goode was successful from the tee in the last minute to seal an eight-point victory.

The foundation for victory was laid by the visitors, minus their suspended captain Owen Farrell, in an eye-catching opening 40 minutes.

Johnny's Sexton's sixth-minute penalty drew the sides level, but that was as good as it got for the men in blue.

The hosts had no answer at the breakdown and in the scrum, with Alex Goode (3) knocking over penalties and Elliot Daly adding two more from long range. Referee Pascal Gauzere showed no mercy to Leinster's creaking scrum. 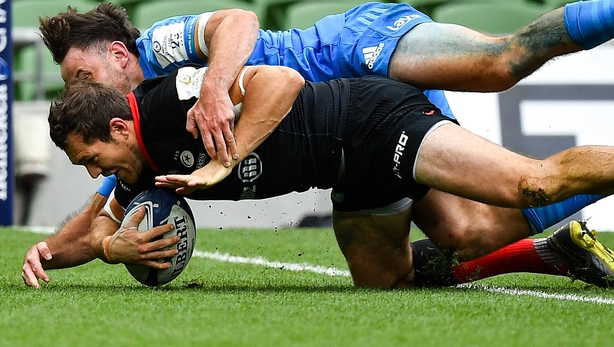 And it wasn't simply a case of forward dominance. A superb flowing move three minutes before the break culminated in a brilliant score, with Duncan Taylor offloading to Goode to ensure a 19-point cushion.

Andrew Porter, after TMO consultation, reduced the deficit in the 49th minute. Fifteen minutes later and the gap was down to five points. Jordan Rhodes was penalised for a clash of heads when attempting to tackle Sexton, and the out-half kick duly dispatched the penalty to touch. 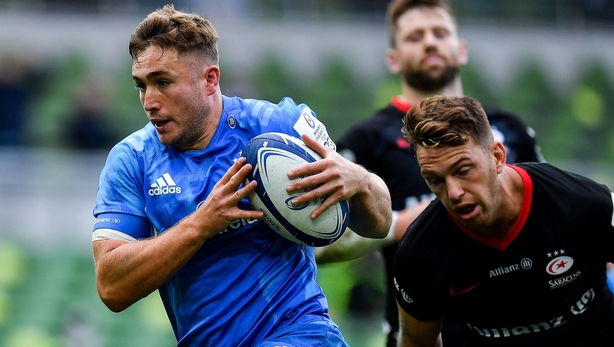 From the resulting lineout Sexton quickly fed Larmour from the maul, cutting out four defenders, and the full-back raced under the posts with the scoreline now 22-17 in Saracens' favour.

The momentum was with Leinster, but they were again undone by the concession of scrum penalties and it was Sarries who finished the stronger.

In the final minute Goode knocked over the visitors' first score of the half to seal a 25-17 win and they will face Racing 92 in the semis next weekend.