No matter what team Leinster named this season in the Guinness Pro14, they always had too much in hand for their rivals.

Leo Cullen's squad capped off an invincible season domestically on Saturday as a side which saw the likes of Johnny Sexton rested for much of the game, came out comfortable winners over Ulster in the Pro14 final at Aviva Stadium.

Coupled with that depth, the fact that the province is increasingly supplying more and more playing talent to their provincial rivals points to a deepening dominance.

Indeed as former Leinster front row Bernard Jackman told the RTÉ Rugby Podcast, internal training games are occasionally more competitive than some of what the province faces in the Pro14.

"Unfortunately at the moment, and this sounds maybe arrogant, but Leinster in some games - Ulster made it competitive and Munster made it hard for them - but sometimes they get harder training sessions on a Tuesday than they get in a Pro14 game," he said.

"We saw their second string play Ulster three weeks ago and comprehensively beat them and that's the problem for Munster and Ulster in that when they train against their second string, they're very rarely put under massive pressure. 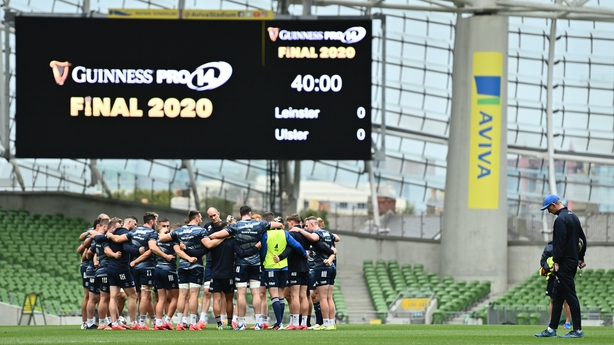 "So they only get a chance to learn three or four times a year. So Ulster have got a hard game against Toulouse this weekend but after that, they might not play a first choice Leinster team again for a long time, whereas Leinster, if you look at how they've changed their game plan, they're able to find things that work or don't work on a Tuesday or a Wednesday which is phenomenal for them.

"They don't care if they're getting better on a Saturday or Sunday. Leinster fans aren't worried about Ulster, Munster or Connacht. They're very much focused only on Leinster."

He added that Ulster "needed four things to go wrong for Leinster" to score their early try last Saturday and "after that they were punch drunk because Leinster were just able to take it out of them".

Amid Leinster's dominance, the future structure of the Pro14 also remains in the watch-this-space category and Jackman, alongside Donal Lenihan, Wes Liddy and Hugh Cahill discussed what could happen to the competition.

Follow the Champions Cup quarter-final between Leinster and Saracens (3pm Saturday) with our live blog on RTÉ Sport Online and the RTÉ News app or listen to live commentary on RTÉ Radio 1.