Owen Farrell will miss Saracens' Champions Cup quarter-final against Leinster after being issued with a five-match ban for his dangerous tackle against Wasps on Saturday.

The England captain faced an online disciplinary hearing on Tuesday night to answer for the first red card of his career after being sent off on the hour mark of the Gallagher Premiership defeat at Allianz Park.

Farrell was dismissed for a high and reckless tackle on 18-year-old replacement full-back Charlie Atkinson, who was knocked out and will not train for at last two weeks because of concussion protocols.

The 28-year-old accepted the charge and the panel decided the offence was at the top end of severity, resulting in a suspension of 10 weeks, which was halved because of mitigating factors.

The ban rules him out of Saracens’ seismic European showdown with Leinster on 19 September, their only meaningful game left this season following their relegation from the Premiership for repeated salary cap breeches.

And if the double winners pull off a shock by prevailing in Dublin, they will also be without their talisman for the semi-final a week later after he was told he can only resume playing from 5 October.

"It was accepted by the Rugby Football Union, the player and the panel that the offending was reckless and not intentional," independent panel chair Mike Hamlin said. 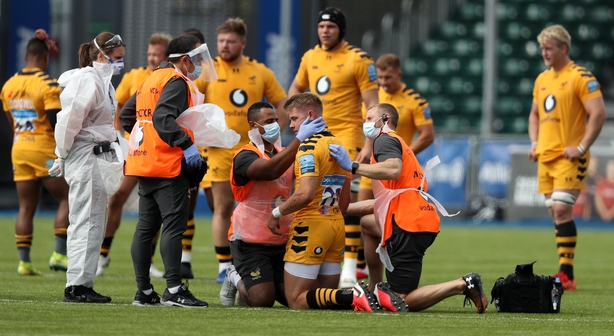 "This was a totally unacceptable contact with the neck/head of Charlie Atkinson as a result of a reckless tackle which had the consequences of him being knocked unconscious and sustaining a concussion.

"This resulted in the panel concluding that this was a top end offence with an entry point of 10 matches. There were no aggravating features.

"Testimonials provided by (Saracens director of rugby) Mark McCall, (England head coach) Eddie Jones and the founders of a charity with which the player works very closely were of the highest quality.

"The panel concluded that applying the off-field mitigating factors, notwithstanding his suspension four and a half years ago, the player was entitled to a reduction from 10 matches to five meaningful matches."

Upon making the tackle, Farrell immediately showed his remorse and apologised to Atkinson. He could be heard telling referee Christophe Ridley "I know this was bad".

McCall revealed on Tuesday that the Lions star was "incredibly regretful", adding that "Owen got the tackle wrong, there’s no question about that".

Despite his good disciplinary record – he was banned for the same offence four years ago in his only previous suspension – he has skated on thin ice by escaping sanction for a string of similarly reckless tackles, most notably for England.

Jones will be relieved that the ban will have no impact on his captain’s availability for the autumn campaign, which begins with a rearranged Six Nations fixture against Italy on 31 October.

Follow the Guinness Pro14 final between Leinster and Ulster Munster (7.35pm Saturday) with our live blog on RTÉ Sport Online and the RTÉ News app or listen to live commentary on RTÉ Radio 1.